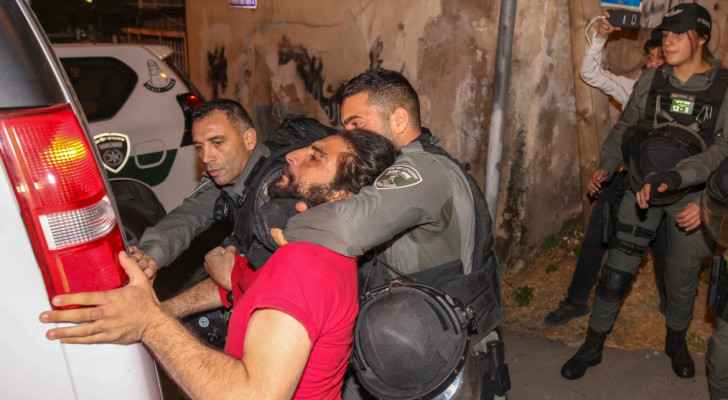 According to the Israeli Occupation police statement, the arrest came on the background of "uncontrolled behavior and assault on police officers."

Thursday, at the Israeli Occupation Supreme Court in Occupied Jerusalem, a hearing will be held for the lawyers of the Palestinian families and the settler association "Nahalat Shamoun,” which is demanding the evacuation of the families, according to what the lawyer for Palestinian families, Sami Irsheed, confirmed to Agence France-Presse.

Earlier Wednesday, Palestinian and foreign residents and activists organized a collective Ramadan Iftar in the middle of the neighborhood, in the presence of dozens.

Immediately after Iftar, the police and border guards arrived, who tried to disperse the protesters. The Palestine Red Crescent Society confirmed that ten injuries were recorded.

The association said in a statement, "Ten injuries were dealt with in clashes with the occupation forces in the Sheikh Jarrah neighborhood."
According to the statement, all the injuries were treated in the field, indicating that there were "six suffocation injuries, three rubber bullets, and one injury as a result of beating."

During the protest, the protesters broadcast songs on large headphones and chanted patriotic slogans, while the settlers who had previously taken over a house in the neighborhood responded with Hebrew songs.

The Sheikh Jarrah neighborhood is located in occupied East Jerusalem, which was subject to Jordanian sovereignty like all other West Bank cities before Israel occupied it in 1967 and annexed it in a move not recognized by the international community.

Jewish settlers, with the support of the courts, seek to seize homes in Sheikh Jarrah, claiming that Jewish families used to live there and fled in the 1948 war when the state of Israel was established. However, the Israeli Occupation does not return property and homes to Palestinians who have lost them and which are inhabited by Jews.

The property-claiming Jewish associations are currently seeking to vacate the homes of 58 other Palestinians, according to Peace Now.
The families say the risk of eviction threatens about 500 Palestinians in general.

Jordan had built housing in the Sheikh Jarrah neighborhood to house the Palestinians who were displaced in 1948, and has lease contracts to prove it.