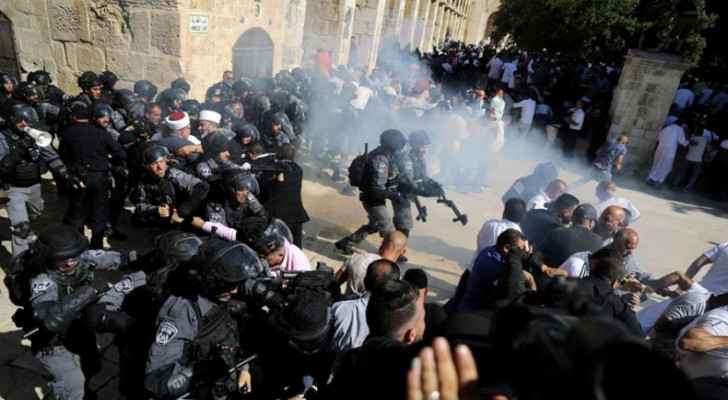 The Palestinian Red Crescent said that at least 105 Palestinians were injured, and about twenty of them were taken to the hospital.

Israeli Occupation police stated that 20 policemen were injured, and 44 arrests were made.

The police said that they reinforced their presence at the entrances to Bab al-Amud, the main gate to the Old City and the surrounding neighborhoods, and deployed hundreds of their men and cavalry forces in order to protect "freedom of expression" and "the right to demonstrate."

However, this demonstration by the "Lahava" movement, whose members chanted "Death to the Arabs," according to eyewitnesses, was considered a provocative step and led to confrontations with Palestinians who happened to leave the evening and taraweeh prayers at Al-Aqsa Mosque.

Palestinian youths in Occupied East Jerusalem organized a demonstration to protest against that march, which led to clashes between these demonstrators and the Israeli Occupation security forces at the entrance to the Old City that lasted until dawn.