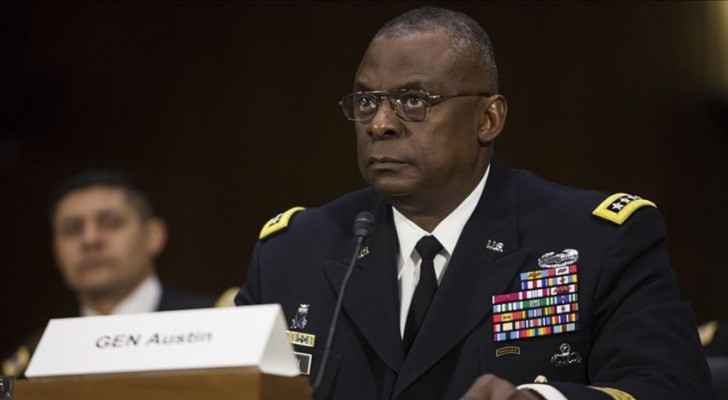 The Pentagon announced Thursday that US Defense Secretary Lloyd Austin will leave Washington Saturday on a tour that includes the Israeli Occupation, Germany, Britain and NATO headquarters in the Belgian capital Brussels.

The Pentagon said in a statement that Austin, who will become the first secretary in the Biden administration to visit the Israeli Occupation since the Democratic president received the White House keys on Jan. 20, will meet Prime Minister Benjamin Netanyahu and his Israeli Occupation counterpart, Benny Gantz.

The statement added that the US Secretary of State will discuss with Netanyahu and Gantz "common priorities" and will reaffirm the commitment of the United States to the Israeli Occupation to maintain its military superiority in the region.

In Europe, the US secretary will meet with his German counterpart, Ingret Kramp-Karenbauer, NATO Secretary-General Jens Stoltenberg, and British Defense Secretary Ben Wallace.

The statement said only that Austin would leave Washington on Saturday, without specifying the details of the schedule of his trip.

The announcement of this trip comes amid great concern from the Israeli Occupation about the Biden administration's desire to revive the Iranian nuclear deal from which the United States withdrew from during the era of former President Donald Trump in 2018.

The Israeli Occupation has never hidden its opposition to this agreement, which was concluded in 2015 between Tehran and other major powers.

The Israeli Occupation supported the approach adopted by Trump to exert "maximum pressure" on Tehran after his decision to withdraw his country from the agreement and re-impose sanctions on the Islamic Republic.

Biden pledged to return his country to the agreement on the condition that Iran return first to abide by all its components.

In Europe, Austin's visit is overshadowed by the increasing American anxiety over the Russian military build-up at the borders of Ukraine and in the Crimean Peninsula, which Moscow annexed to it in a move not recognized by the international community.

"These are indications of great concern."

She added that the number of Russian military personnel at the Ukraine border has not been this large since 2014, when war broke out in eastern Ukraine and Russia annexed the Crimean peninsula.