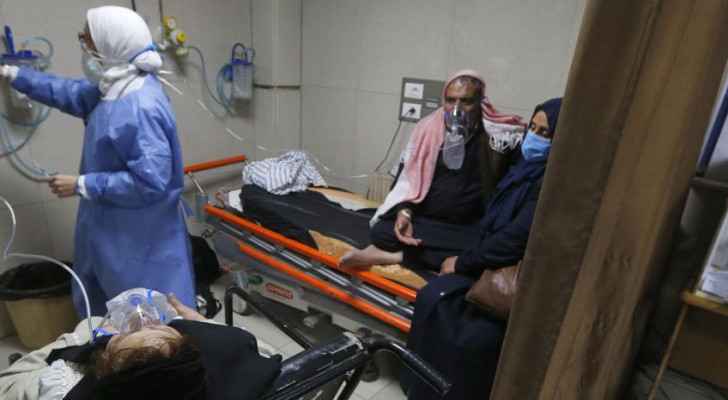 Inside the emergency department of one of the largest hospitals in Damascus, an old woman, exhausted by the Coronavirus, moans while she waits for a bed in the intensive care unit, amid unprecedented pressure witnessed by hospitals in the Syrian capital.

Doctor Asma Spinney, 26, is doing her best to provide primary care. She makes sure that the old woman receives oxygen through a mask that she attaches to her mouth to support her tired lungs, while the room is narrowed by patients and their relatives who are indifferent to social distancing measures.

"Many cases come to us that need a respirator, and many cases need intensive care," the doctor at Al-Mouwasat Hospital told AFP while wearing two masks.

"There are situations where we cannot do anything for them. They die in front of us," she adds with clear emotion.

In the middle of last month, the occupancy rate of intensive care beds allocated to Corona patients in Damascus hospitals reached 100 percent, according to the Ministry of Health, in the first official announcement since the outbreak of the pandemic began a year ago. She said that patients have been transferred from care departments to hospitals outside the capital.

This came after an acceleration in the spread of the virus was recorded, prompting the government to allocate a heart surgery hospital to receive corona patients, provided that heart patients would be referred to other hospitals.

The young doctor hangs an oxygen meter around her neck and writes on a small notebook details of more than ten cases that she saw on Wednesday.

"We sometimes receive more than forty cases a day, and this is greater than the absorption capacity," she explains.

The increase in the number of cases comes in light of an exceptional living and economic crisis, with which it is difficult to impose a tight lockdown.

Since the start of the pandemic, the government-controlled areas, which account for less than two-thirds of the Syrian territories, have recorded more than 19,000 infections, which led to 1,274 deaths.

Doctors and international organizations believe that the number of cases is much higher than the official figures announced. The United Nations Office for the Coordination of Humanitarian Affairs attributes this to the limited testing across Syria, as well as the lack of large numbers of asymptomatic or mildly symptomatic cases.

The director of Al-Mouwasat Hospital, Essam Al-Amin, who oversees one of the most prominent departments of isolation and intensive care related to the virus, told AFP that "the official figures reflect the results of the PCR tests that take place in hospitals or for travelers."

At the same time, he talks about "dozens of moderate and light cases receiving self-treatment at home after follow-up with a specialized doctor."

Al-Mouwasat Hospital has allocated nearly 50 percent of the intensive care departments for Corona patients, in addition to more than 70 beds in the isolation department.

According to El-Amin, hospitals receive "only severe cases."

"Syria is in a state of war and siege, and it does not have large samples from testing tests," he says.

In January, the Syrian government signed an agreement to join the "COVAX" initiative through the World Health Organization.

In a first stage, the platform will provide 912,000 doses of AstraZeneca vaccine to the population in government-controlled areas and in the northeast of the country under the control of Kurdish fighters.

Though the COVAX vaccines were expected this month, the Director of the World Health Organization's office in Damascus, Akjamal Majtamiova, told AFP that the delivery "will be delayed until at least May."

A joint report between the United Nations Office for the Coordination of Humanitarian Affairs and the World Health Organization stated that the first vaccinations will take place in the second quarter of this year "at the latest."

Dr. Ali Rostom, a specialist in septic diseases, breathes a sigh of relief after being informed that a bed is empty in the intensive care unit, following the improvement of a condition that he supervised.  He rushes to direct the nurses to prepare the bed and sterilize it, so that it may constitute a "survival opportunity" for another patient.

After inspecting a critical situation, he says, "The speed of spread is high, and there is an increase in numbers in the form of an explosion ... This wave is more intense in terms of occupying hospital beds."

He does not hide his fear for the medical staff either. He asks older doctors to stay far away from critical cases.

Ten years of war have decimated the medical sector, which also suffers from a shortage of staff.

In one of the hospital rooms, after completing a meeting with young doctors, Dr. Bassam Koueider asserts that "intensive care beds are never empty (..) and there are always those who put their names on waiting lists."

He lowers his voice the moment an ambulance arrives carrying a 70-year-old woman.

"Corona is not a joke," he sighs deeply.