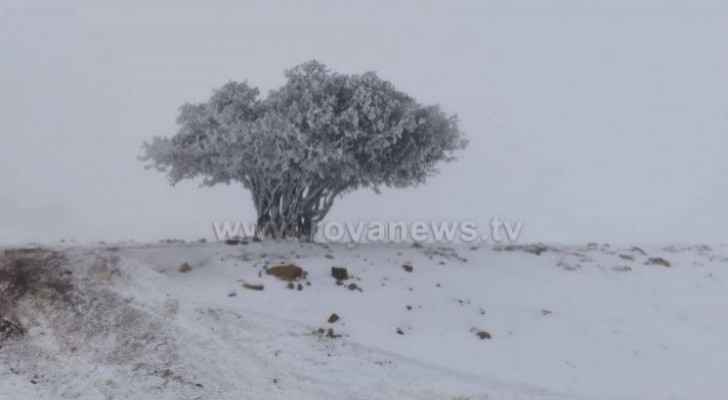 Monday, Jordan is affected by another slump in temperatures with the weather becoming cold in all regions of the Kingdom. Rain showers will fall on the north and center parts of Jordan, with chances of rainfall extending to the rest of the regions.

Additionally, The Director General of ArabiaWeather Mohammad Al-Shaker said during Roya’s morning weather bulletin indicated that there are opportunities for snow to fall on the mountains in Amman, Balqa, Ajloun and Jerash Wednesday, but it is expected that they will not accumulate and be mixed with rain.

Notably, ArabiaWeather announced Sunday that winter was set to return strongly to the Kingdom, as it is affected by a polar front depression.

Shaker said that the polar front is extremely cold and will affect the Kingdom from Tuesday night to Wednesday. He said that he expected most of the high mountains in the southern governorates to witness snowfall.

Shaker pointed out that the high mountains of Tafilah are set to expect the most snow in Jordan within the polar front.

Wednesday, the weather will be cold in most regions and very cold over the high mountain heights. There will be rain at intervals in various regions of the Kingdom accompanied by showers of hail that may be intense at times.

Shaker referred to expectations of snowfall in the regions of Mu'tah and southern Karak Wednesday.

Monday, the winds are westerly and fast, which may result in strong gusts which will raise dust into the air, especially in desert areas.

However, the effect of the air depression will recede during the evening and night hours, resulting in very cold weather conditions. The weather will stabilize and winds will reduce their intensity.

Frost will form in parts of the southern and eastern Badia, and in the Sharah Mountains. Temperatures are expected to drop to zero degrees Celsius or lower.