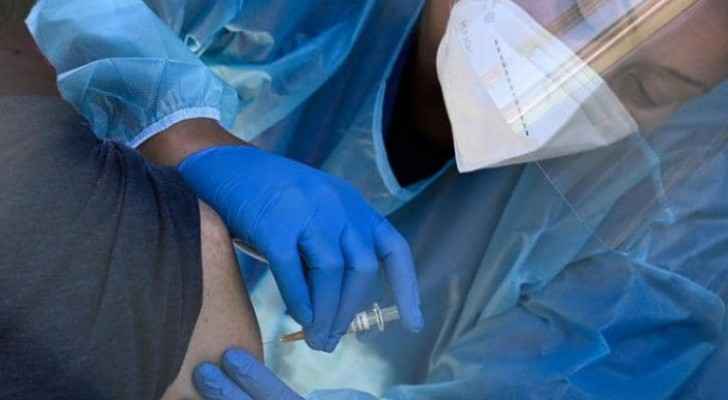 While most sitting in the makeshift outdoor waiting room were elderly, George did not easily blend in with the crowd: dressed in a full suit and freshly shined shoes, the aviation instructor could have well been on his way to a wedding. The smile on his face certainly wouldn’t have passerbyers thinking otherwise.

When asked why he appeared so cheery, he responded simply.

“Today is a day for celebration!”

“I can save myself. And I can save others. And I’m not number one, I’m one of the millions!”

His sentiments were not unlike those of the dozens of Jordanians huddled outside the health center, which is one of 29 set up around the Kingdom. According to the Jordanian minister of health, 5,000 of the 200,000 who have pre-registered for the vaccine are expected to be vaccinated Wednesday. The majority of the vaccinations will take place between Amman and Irbid.

Another 5,000 are expected to be vaccinated Thursday. In total, the government hopes to vaccinate 20 percent of the population in the immediate future.

Citizens and residents, who began signing up for the vaccine when the country launched an online registration platform in mid December, were either vaccinated with the Pfizer/BioNTech vaccine, or the Sinopharm vaccine, the only two vaccines approved for use by the Jordanian Food and Drug Administration (JFDA).

150,000 doses of the Sinopharm vaccine arrived in the Kingdom Saturday, hours after the JFDA granted the vaccine emergency use authorization. The minister of health was vaccinated with Chinese company’s vaccine, reportedly during the trials for the vaccine that took place in Jordan, among several other countries. He reported no adverse symptoms.

200,000 doses of the Pfizer/BioNTech vaccine arrived at Queen Alia International Airport late Monday night and were immediately transferred to vaccination centers, given their extensive storage requirements. The government has yet to announce a formal plan for deciding who gets what vaccine. The Pfizer/BioNTech vaccine was used for inoculations at Jubaiha Medical Center Wednesday morning, but it cannot be confirmed if the same will be true for the entire day, or that all vaccination centers were using the same vaccine.

Those that were vaccinated Wednesday, who received their appointment by text message Monday, were mostly excited to see light at the end of the tunnel, particularly in a country that saw some of the toughest lockdown measures in the world during the pandemic. Jordan was under full lockdown from March to June, under which citizens were only able to buy groceries by foot. The airport was completely closed until September.

Schools remain closed in the country that still imposes a total lockdown every Friday, wherein only worshippers are allowed to leave to their homes to walk to their local mosque.

King Abdullah II Tuesday issued a directive to open all schools and other closed sectors, which include gyms, pools, and wedding venues, amid an increasing decline in coronavirus cases. It was not immediately clear when the directive will take effect, nor whether or not it will affect the total Friday lockdown, which many citizens say has ravaged the local economy that has contracted upwards of three percent in 2020.

Economic concerns did not seem to be on the mind of those lining up for their vaccinations, though. While many did complain of the lack of organization at the center that left elderly folks vying for a chair in an overcrowded seating area, allowing little space for social distancing; and offered no post-vaccination monitoring room, they were mostly excited by the prospect of returning to some sense of normalcy.

Many responded to questions about vaccine side effects with nervous laughter.

“We are waiting to see the results. Being one of the first people, we don’t know the side effects,” said the daughter of 80-year-old Mohammed Assad Al Issa.

But it didn’t stop her from encouraging her father to take the vaccine, which the country is urging all citizens to do.
No further encouragement is needed for Shubat, though, who left the vaccination center grinning from ear to ear.

UAE intends to implement measures to restrict movement of ....

UAE intends to implement measures to ....

Work in outpatient clinics at King ....