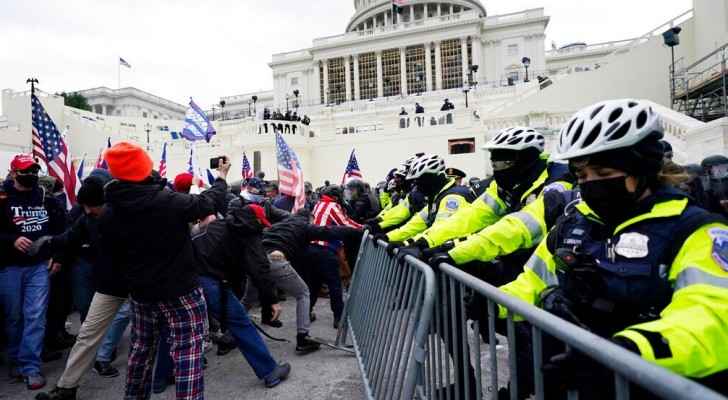 Federal police, the FBI and Homeland Security were also on scene.

Authorites began to clear parts of the Capitol complex and evacuate lawmakers, who, with gas masks, left the Senate and House floors shortly before rioters invaded chambers, as they determined the safety status of the building.

During the invasion, rioters vandalized and looted parts of the Capitol building, including offices of representatives.  Police officers used their guns to deter the rioters during the invasion, with one woman reportedly shot in the neck by a member of law enforcement. She is in critical condition.

President-elect Biden, in a nationally televised speech, said the attack on the capital was an 'assault on democracy' and called on President Trump to 'Go on national television now to fufill his oath and defend the consitution and demand an end to this seige,' shortly before Trump posted a video message online.

In his video, Trump continued to insist the election was fraudulent, and expressed his love for his supporters and their actions, eventually telling them to 'go home. We need to have peace.'

Many believe the video could possibly exacerbate the situation, as it gave credence to the idea that rioter actions were founded.

Notably, Trump addressed his supporters hours before they beseiged the Capitol, encouraging them to not lose faith in his 'win' and 'walk up to the Capitol.'

Other lawmakers have denounced the attempted 'coup,' and insisted on security revisions, angered that the Capitol was so vulnerable to an attack.

The head of NATO called scenes in Washington 'shocking.'

The last time Capitol Hill was evacuated on September 11, 2001.

Russian Republic of Bashkortostan to introduce ....

Russian Republic of Bashkortostan to introduce ....

Russian Republic of Bashkortostan to ....