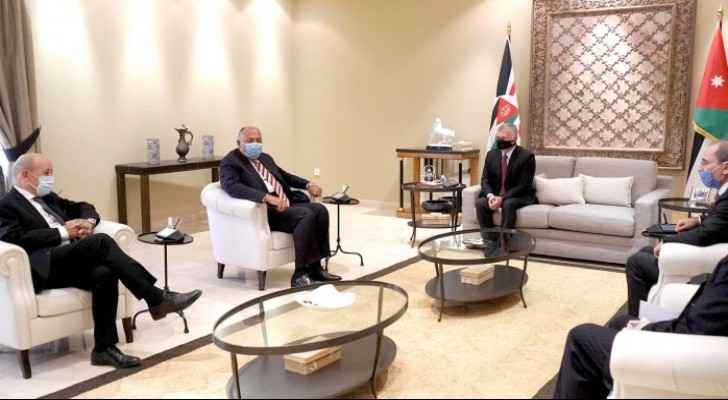 It is important to continue the coordination on various issues of common interest, one of the most important is the efforts to achieve peace in the Middle East, and the need to intensify efforts to reach political solutions to the crisis in the region, said His Majesty.

In addition, Jordan's firm position on the Palestinian issue remains stable where there is a need in ending the Palestinian-Israeli conflict on the basis of the two-state solution, in a way that guarantees the establishment of an independent, sovereign and viable Palestinian state on the lines of June 4, 1967, with East Jerusalem as its capital, living in peace and security alongside the occupation entity, the European role is important in this regard, His Majesty added.

The visit of the Foreign Ministers of Egypt and France and the Special Representative of the European Union for the Middle East Peace Process to the Kingdom in order to continue the coordination and consultation regarding the Palestinian issue and working for the resumption of negotiations between the Palestinians and the Israelis, to end the conflict.

The meeting was attended by the Minister of Foreign Affairs and Expatriate Affairs, and his majesty’s Adviser for Policies.