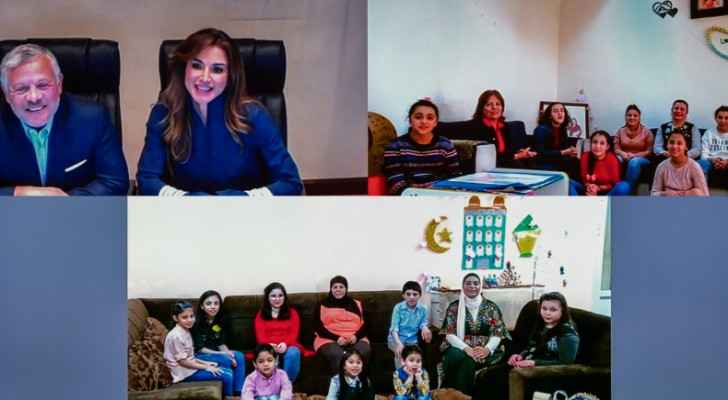 Their Majesties King Abdullah II and Queen Rania Al Abdullah, in a video call on Sunday, spoke to a group of orphans at Dar Al Hanan in Irbid and Al Hussein Social Institute in Amman and checked on their conditions.

King Abdullah extended his best wishes to the children on the occasion of the holy month of Ramadan and checked on the progress of the distance learning process at Dar Al Hanan and Al Hussein Social Institute.

Queen Rania told the children and staff that Their Majesties had grown accustomed to celebrating Ramadan and having iftar with them every year, but this year’s exceptional circumstances prevented that.

Director of Dar Al Hanan in Irbid Sawsan Haddad and foster mother Raeda Tashman gave a briefing, during the phone call, on the orphanage, which was founded in 1989 and houses 33 girls between the ages of 12 and 18.

Moreover, director of Al Hussein Social Institute in Amman Naziha Shatarat and foster mother Latifa Abu Hdeib said the institute was founded in 1953 and houses 114 orphans between the ages of 1 and 12.

Children at the two orphanages thanked Their Majesties for the attention they give them and for their ongoing outreach.

There are 18 orphanages in Jordan, housing nearly 700 orphans. School students at these orphanages have continued their education remotely via Darsak online platform, with the support of supervisors at the orphanages.