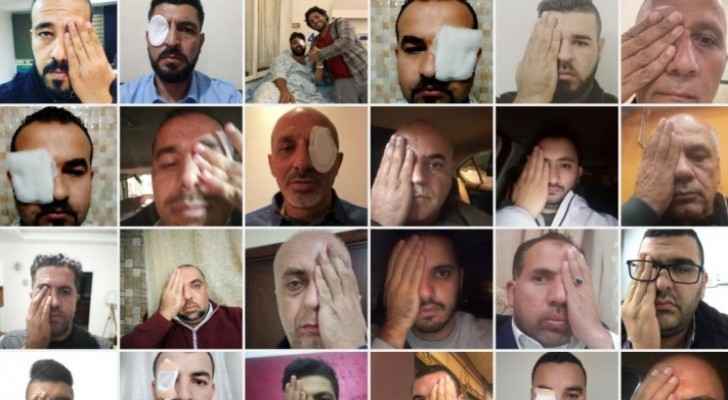 A number of Palestinian activists and journalists launched an online campaign attached with hashtags like #We_are_Moath in support of photojournalist Moath Amarneh, who was badly injured on Fridaywhile covering a protest in the south of the West Bank.

Amarneh lost his left eye after being seriously injured by a metallic bullet fired by an Israeli soldier in the Surif region of the Hebron governorate, where he was covering a protest against land confiscation. He underwent an operation to remove the bullet, which seems to have settled near the brain causing the operation to be more difficult. More operations are expected in the coming days.

The campaign aims to shed light on Israeli violations against journalists such as in creating obstacles for them while covering news on events related to Israeli escalations against the Palestinians.

Journalists, who posted pictures of themselves covering their left eyes, say that Amarneh's story is being spread out in several languages to expose Israel's policies and measures, especially against Palestinian journalists and media.

The Palestinian Journalists Syndicate (PJS) condemned the attack on Amarneh, describing it as "a deliberate targeting by the Israeli army of a colleague wearing a bullet-proof vest signed Press." It also called on "international institutions to act quickly to stop this violence against the press in Palestine."

Mohammad Lahham, head of the freedoms committee in the PJS, said that Israeli forces deliberately target journalists, noting that there have been 606 attacks against journalists reported up until last October.

Anthony Bellanger, General Secretary of the International Federation of Journalists (IFJ), has also condemned the shooting.

"Once again, the IFJ deplores the attacks on Palestinian journalists by the Israeli military. The IFJ recalls that international law applies everywhere and that no government is above it. It is now time for the United Nations General Assembly to adopt the Convention for the Protection and Safety of Journalists so that the impunity enjoyed by predators of press freedom and democracy can end in Israel as elsewhere," he said in a statement after the shooting.