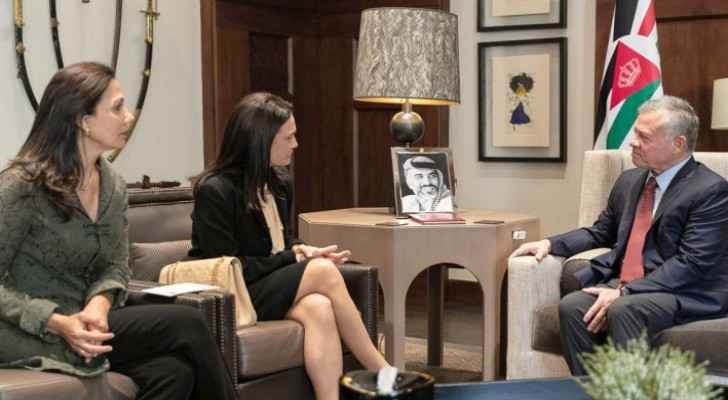 His Majesty King Abdullah II received on Wednesday, April 3, 2019, at the Husseiniya Palace, Vice President and Foreign Minister of the Republic of Panama Isabel Alvarado.

The meeting discussed mechanisms of enhancing cooperation between Jordan and Panama, in addition to the importance of developing cooperation with Panama in the political, economic and tourism fields.

His Majesty pointed to the importance of opening the Embassy of the Republic of Panama in Amman recently.

King Abdullah also stressed the necessity of reaching a just and lasting peace based on a two-state solution that would lead to the establishment of an independent Palestinian state with East Jerusalem as its capital.

Regarding the Syrian crisis, the meeting discussed the need for a political solution to the crisis, which preserves Syria's land and people and guarantees a safe return of refugees.

The meeting dealt with the efforts exerted in the fight against terrorism using a comprehensive approach along with the importance of intensifying international cooperation and coordination in this regard.

The meeting was attended by the Minister of Foreign and Expatriates Affairs, Advisor to His Majesty the King, Director of His Majesty's Office, the delegation accompanying the Vice President of Panama and the Ambassador of Panama to Amman.