This week's weather forecast - don't let the sun fool you! 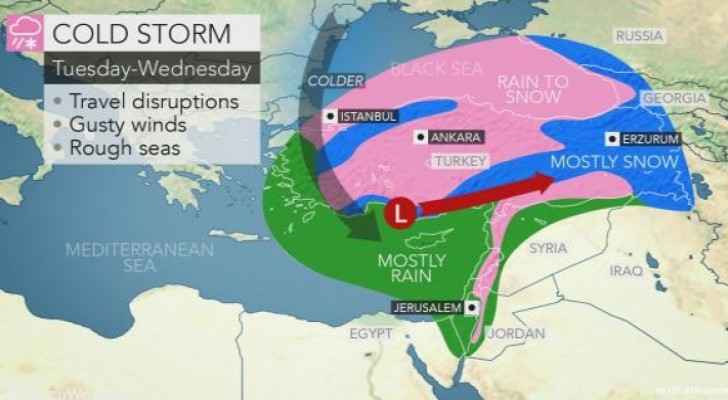 The sun is still shining on Sunday, but don’t let it fool you, as temperatures are expected to drop across the Kingdom, with a chance of rain in some areas, according to the Jordan Meteorological Department (JMD).

Even cooler temperatures have been forecast for this evening, with rain predicted to fall in northern parts of the country.

The JMD weather forecast for the rest of the week:

Another drop in temperatures is in the forecast, with the weather remaining cold in most parts of the Kingdom. Skies are predicted to be partly cloudy.

In the north, overcast skies will prevail, with rain showers predicted at times, that may extend to the central regions in the evening. Winds may cause dust to rise, especially in southern and eastern regions.

A slight rise in temperatures is expected across most parts of Jordan, with relatively cold weather. At night, rain showers are expected in the north, gradually spreading to parts of the central regions. Winds may also cause dust to rise, especially in southern and eastern parts of the country.

JMD has issued a weather warning for this day, as a serious cold wave is expected to hit Jordan, which would have travelled all the way from the Balkans. Accordingly, cloudy skies and rain will follow.

Rain may be heavy at times and accompanied by thunderstorms and hail showers in some areas, which may cause floods in valleys and lowlands.

In the evening and late at night, snow is expected to fall over high mountains.