The protesters referred to Razzaz's gov as a “government of thieves.” (Roya) 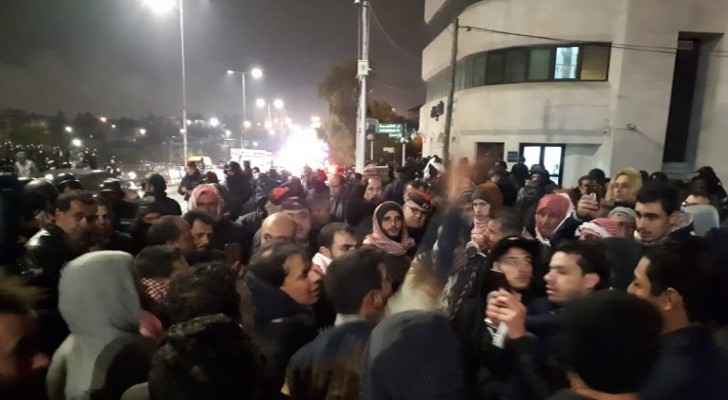 Torrential rain on Thursday night, December 7, did not deter some 400 young Jordanians from heading near the Fourth Circle to protest against the government’s “corrupt economic policies.” Protesters held up placards and chanted angry phrases: “Government of thieves” and “Shame, shame on those who see and hear and do nothing.”

The fed up protesters also noted that they didn’t just want “new faces” in government, but that they wanted “new policies.”

They also criticized the current Prime Minister Omar Razzaz: “They removed a doctor and gave us a doctor.” His predecessor, Hani Al Mulki, was too a PhD holder. “We want action and not words.”

The protests kicked off last week, after the government approved the new Income Tax Bill (ITB), which has been opposed by the majority of Jordanians since it was first discussed by the parliament last June.

In June, thousands of people turned up to the anti-ITB demonstrations, including Jordanian unions, parties and civil society groups. However, none of those parties have endorsed or officially taken part in this week’s protests.

In fact, the Professional Associations Council, an umbrella for dozens of unions and the largest civil society group in Jordan which led June’s demonstrations, "has denied having any involvement in the recent protests," according to The National.

In a statement issued after the first demonstration last Friday, the Council said that they “still do not know the identity of those who called for these protests,” while stressing that the unions did not call for any protests.

Meanwhile, both the General Federation of Jordanian Trade Unions and the Civil Alliance Party denied taking part in this week's protests.