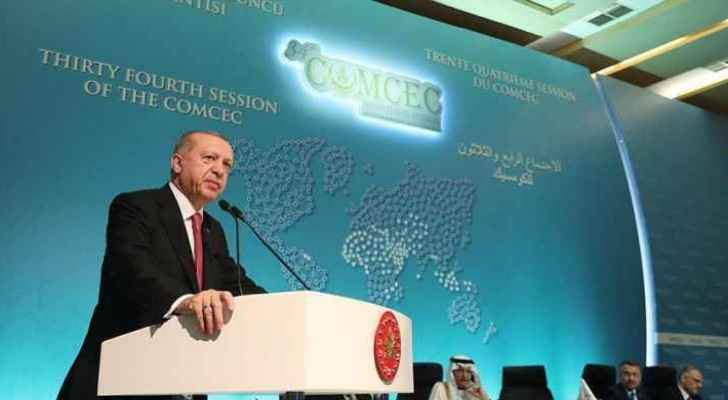 Turkish President Erdogan praised the sacrifices of the Palestinian people in defence of Jerusalem, and said that Turkey will "prevent the occupiers from turning off the lamps of the holy city" by encouraging his own citizens to visit Jerusalem.

This came in a speech delivered by Erdogan at the opening session of the 34th meeting of the Standing Committee for Economic and Commercial Cooperation of the Organization of Islamic Cooperation (COMCEC) in Istanbul, on November 28, 2018.

The Turkish president pointed out that there is a plan to redraw the region through a major war, which has caused crises and tensions, from Syria to Yemen, Iraq and Palestine, and has shed tears and blood.

Erdogan pointed out that the negative effects of the First World War are still visible, despite the passage of a century, and that Turkey is the most country in the region to feel those effects.

"We must find solutions to the problems directly related to the outcome of the First World War, and we can only do so by carefully identifying the sources of those problems," he said. "We Muslims must not set new borders and walls between us, in this region that has drawn its borders with blood.

"There is no need to discuss who bears the responsibility of millions of hungry and displaced people in Yemen, because Muslims are the ones responsible," Erdogan said.

The Turkish president stressed the need for Muslims to stop falling into the trap of adopting the theory of "a drop of oil is more precious than a drop of blood."

On the Palestinian issue, Erdogan explained that Palestine will remain as long as there are Muslims and people who defend justice and freedom.

"History for us is not a set of events that have taken place, but it is a source of lessons for which we draw strength and courage from," he said.

Erdogan extended his greetings to the young men and women of Palestine who sacrifice their lives in defence of Jerusalem, and to the Palestinian refugees who for 70 years have longed for their homeland.

In this context, he said: "I send a special greeting to the land of civilization and peace, Palestine, and to Al-Quds Al-Sharif, the heart of the Islamic world."

He called on Muslims not to fall into the traps of those who try to draw differences between them.