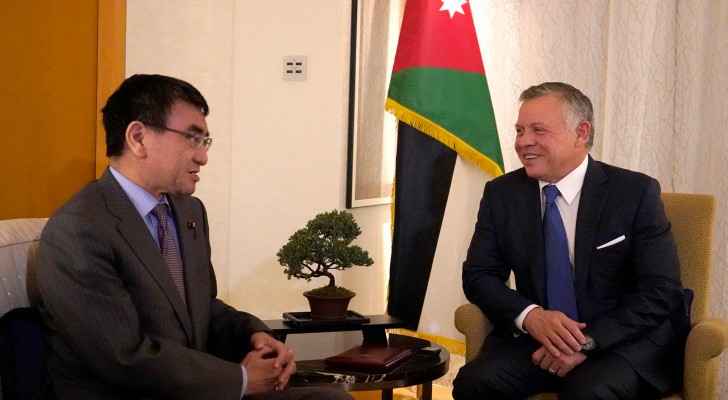 His Majesty King Abdullah II discussed the Jordanian-Japanese ties and the latest developments in the Middle East with Japan’s Minister of Foreign Affairs Taro Kono, on Tuesday, November 27, 2018.

The meeting highlighted the two sides’ keenness to advance the strong bilateral ties between Jordan and Japan in various areas and the importance of maintaining coordination on affairs of mutual interest.

The monarch stressed on the significant role of the fourth policy dialogue meeting between Jordan and Japan, that will be held in Amman next year, on increasing bilateral cooperation in a number of sectors.

Pushing peace process between Palestinians and Israelis was on the top of the regional issues tackled at the meeting. His Majesty reiterated the importance of intensifying efforts to re-launch Palestinian-Israeli negotiations on the basis of the two-state solution and leading to the establishment of an independent Palestinian state with East Jerusalem as its capital.

The King commended Japan’s initiative “Corridor for Peace and Prosperity” and its efforts in pursuing regional peace. His Majesty also praised Japan’s role in providing support to UNRWA to enable it to continue its education, health, and relief services.

Furthermore, the importance of reaching a political solution in Syria was discussed, one that safeguards Syria’s territorial integrity, the unity of its people, and guarantees Syrian refugees a safe return was stressed at the meeting.

While discussing the efforts to counter terrorism, within a holistic approach, the King expressed appreciation for Japan’s role as a partner in the Aqaba Meetings, which aim at enhancing security and military coordination and cooperation and exchanging expertise and information between various regional and international partners fighting terrorism.

The meeting was attended by Minister of Foreign and Expatriates Affairs, Ayman Safadi, Adviser to His Majesty and Director of his Office of His Majesty, Manar Dabbas, as well as Jordan’s Chargé d'Affaires in Tokyo Raghad Al Saqqa, and Japan’s Ambassador to Jordan Hidenao Yanagi.