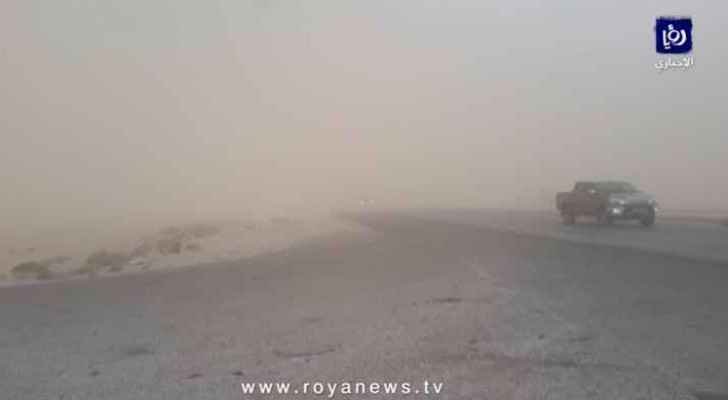 Many areas in the southern governorates are witnessing rain and heavy winds laden with dust since Thursday morning, October 25, 2018, as the expected depression hits the Kingdom.

Roya's reporter states that roads in the south, especially the desert road, are dangerous to drive in due to the poor horizontal vision conditions cause by dense dust.

The Kingdom will be experiencing a significant six degree drop in temperatures, reaching during the day a maximum of 23°C, and a minimum of 15°C at night, which are average tempratures for the time of year.

Strong southwest winds will blow up to 50 km per hour. The chance for thunderstorms will gradually increase in various parts of the Kingdom. Some areas will witness heavy rain, with a chance of hail.

Arab Weather site warns of the thunderstorms as they bring the possibility of flooding in some areas.

The Civil Defense Directorate (CDD) called on citizens to adopt precautionary measures during the expected unstable weather in Kingdom.

Drive carefully, especially as rain begins to fall; as water and dust render roads slippery and dangerous, causing accidents to happen. Only drive if necessary, and be careful when horizontal vision is obstructed.

The CDD called for the need to move to high safer and away from valleys and places which form floods.

Citizens can call (911) in the case of emergencies, and when necessary.

Fears of flooding arise due to delays in Downtown Amman ....

Fears of flooding arise due to delays in ....

Fears of flooding arise due to delays in ....

Fears of flooding arise due to delays ....