Razzaz meeting with the CDD 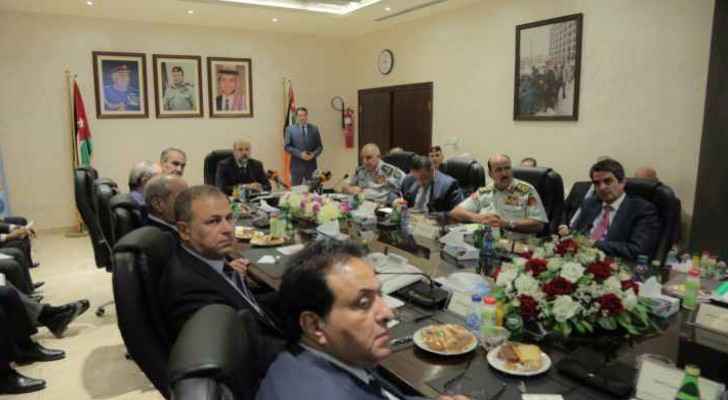 During his visit to the Civil Defence Department (CDD), Prime Minister, Omar Razzaz, looked into preparations being made for winter weather conditions, on Wednesday, October 24, 2018.

Razzaz praised the CDD for the progress achieved in its readiness to deal with coming winter conditions. He also thanked citizens’ cooperation, which was represented by volunteer work, and by paying attention to the CDD’s guidance and advice during weather conditions in winter.
The PM also commended the Supreme Council of Civil Defence (SCCD), adding that it symbolizes a state of solidarity; something which was previously stated by His Majesty King Abdullah II, in his address to the National Assembly.

For his part, Director General of CDD, Major General Mustafa Abed Rabbo Al-Bazaya, referred to the high coordination and the continuous partnership between the CDD, the ministries, official and security institutions in dealing with winter weather conditions, noting that developing plans in advance contributes to reducing the number of incidents and accidents in winter time.

In addition, the attendants watched a video presentation on the department’s plan to deal with several hypotheses that can occur during bad weather conditions. The video was presented by the Director of Operations, Mr. Farid Al-Shara, who also talked about the opening of a new Civil Defence center in Adassiyah, south of Jordan.   Accordingly, the number of CDD centres will increase to 200, as a new CDD is expected to open soon in Mafraq.

It is noteworthy that the SCCD meets once every six months, and whenever necessary; headed by the Minister of Interior, the Director of CDD, as his deputy.

The council also includes in its members 36 ministries, official and security institutions, in addition to the Jordan Red Crescent Society (RCS), and the Amman Chamber of Commerce and of Industry. Experts are invited when necessary for consultations.