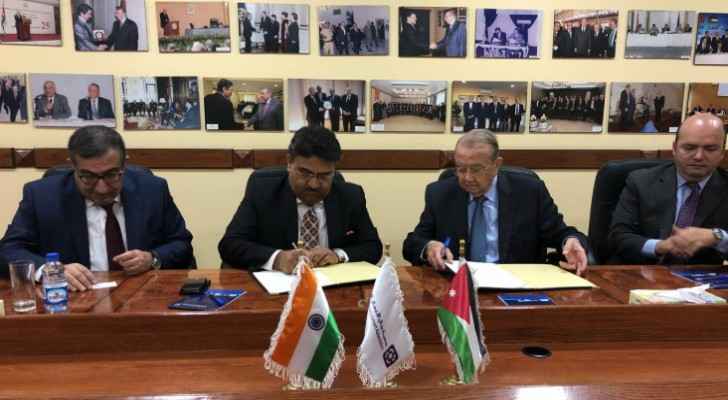 A Memorandum of Understanding (MoU) was signed between the Jordanian Businessmen Association (JBA) and the Millennial India International Chamber Of Commerce Industry and Agriculture (MIICCIA) on Sunday, September 17, 2018.

The agreement is intended at boosting economic ties between the two countries and was signed by JBA Chairman, Hamdi Tabbaa, and MIICCIA President, Anil Trigunayat, expressed their interest in establishing a solid partnership between, stating that this agreement will accelerate trade transactions as well as increase the potential of Indian investment in the Kingdom.

Trigunayat described the meeting in a tweet saying:
"It was a great pleasure meeting my dear friend H E Mr Hamdi Tabbaa Chairman Jordan Businessmen Association and to sign a MOU for collaboration on behalf of MIICCIA Chamber of Commerce for institutionalised cooperation and to promote B2B exchanges between India and Jordan."

Tabbaa and Trigunayat stressed on the importance of improving the mutual investment opportunities and trade policies that includes technological and industrial cooperation between the Indian and Jordanian sectors.

Agreeing to conduct regular meetings in the near future, the two sides will be following up together on the MoU’s implementation. They also will be considering adding a third party in order to enhance this agreement.

It is worth mentioning that Jordan is home to more than 10,000 Indians, currently working in textile, construction, manufacturing, education, IT, finance as well as medical and multilateral organizational sectors.

Grateful that a high level delegation from an important industrial region Zarka Chamber of Industry led by HE Fares S Hammoudeh ,Chairman came to Amman to sign the MOU with MIICCIA Chamber for enhancing industrial and B2B partnership with Indian businesses #jordan #India pic.twitter.com/wPNn69GQkY