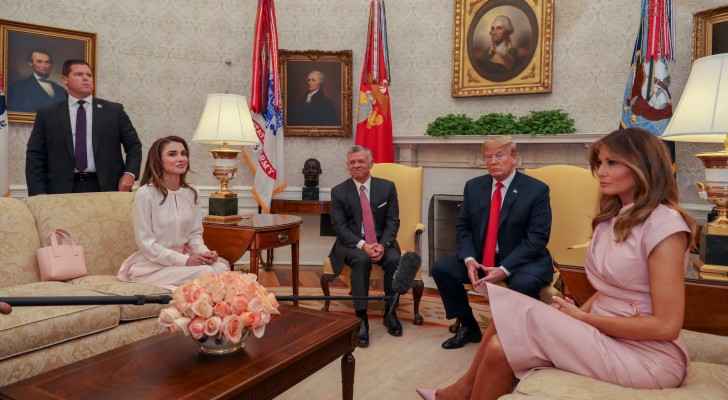 His Majesty, King Abdullah, and US President, Donald Trump, held talks at the White House on Monday, to discuss the strategic partnership and bilateral ties between the two countries, cooperation in various fields, as well as the latest regional and international developments, the King’s official website reported.

The two leaders first held a meeting in the Oval Office which was attended by Her Majesty Queen Rania Al Abdullah, and First Lady Melania Trump.

During the subsequent expanded talks, King Abdullah expressed his appreciation for the continuous support the US has offered Jordan to help overcome the difficulties emerging from regional crises.

“On behalf of myself and my people, thank you so much for all that you have done for us,” the King told Trump.

On his side, President Trump affirmed the US commitment to standing by Jordan and supporting the economic reforms the Kingdom is undertaking.

Talks also covered regional developments including the Palestinian issue, the Syrian crisis, and efforts to achieve peace and bolster security and stability in the region.

Discussing the peace process, His Majesty stressed the urgent need to reach a just and comprehensive peace plan based on the two-state solution that enables Palestinians to establish an independent state on the 1967 lines, with East Jerusalem as its capital.

Talks also addressed terrorism, the threat posed by Iran, and ways to maintain stability in the de-escalation zone in southwestern Syria, which was agreed upon last year by Jordan, the United States and Russia.

Abbas calls upon Muslim and Christians ....