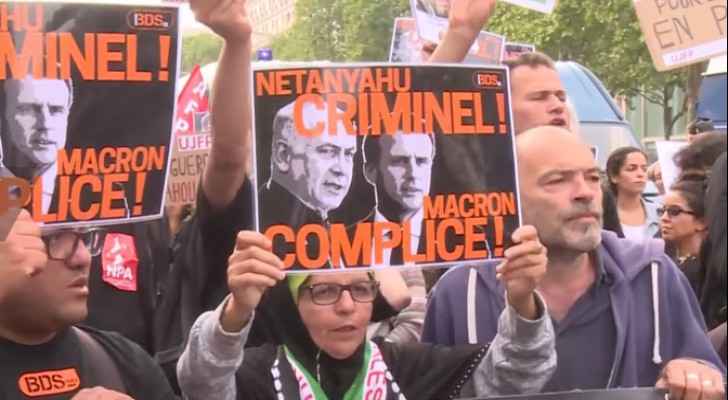 Hundreds of protesters gathered on Tuesday in the streets of France denouncing Israeli Prime Minister Benjamin Netanyahu’s visit to the country, the AFP reported.

The rally took place in various cities, including Paris, where around 300 activists marched to express their solidarity with the Palestinian people.

The demonstration –which was forced by the police to change its course and ended up on the opposite bank of the Seine River— had activists waving Palestinian flags and chanting anti-Israel slogans.

Banners portrayed Netanyahu as a war criminal and asserted that Israel was an apartheid state. The Franco-Jewish Union for Peace, or UJFP in French, called for the cancellation of the “France-Israel season.”

A matching gathering of 200 activists, centered in the southern city of Marseille, carried a huge Palestinian flag, while another 80 protesters took part in a similar demonstration in the northern city of Lille.

Netanyahu’s meeting with President Emmanuel Macron aimed to influence the French stand regarding Iran's nuclear agreement. The PM’s visit comes as part of his tour to European countries; he has been in Berlin earlier this week and plans to visit London on Thursday.