Photos for Ibrahim al-Assaf, a former finance minister and board member of Saudi Aramco after release. (Twitter: @saudistuf) 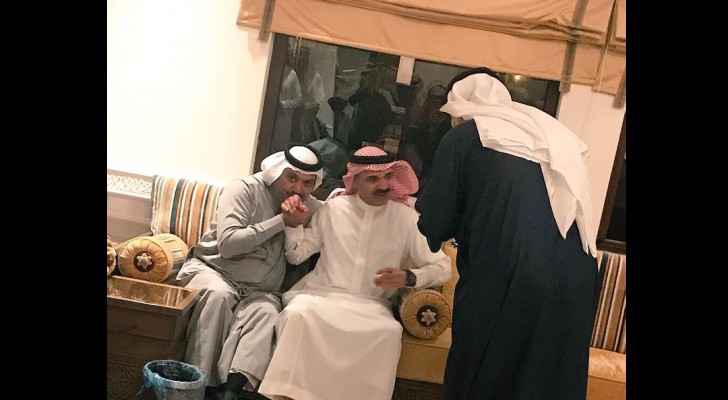 Saudi Arabian authorities released 23 of the 200 or more detained princes and businessmen in a first release since they were detained in November, Okaz newspaper reported.

The report said that this step came after they have reached a deal with the government, without mentioning their names.

The newspaper report said more releases will take place in the coming days and trial proceedings will begin soon for those who denied charges against them.

On the other hand, after Monday reports confirmed that the billionaire Prince Alwaleed Bin Talal, who was detained in the crackdown, was asked for $6bn in return for his release.

London’s Rai Alyoum News reported on Tuesday that the richest businessman in the Middle East was taken to a hospital to be treated for exhaustion and pressure.

Among those who have been released in the past week were Ibrahim al-Assaf, a former finance minister and board member of Saudi Aramco, former assistant minister of finance Mohammed bin Homoud Al Mazyed, Prince Turki bin Khalid, and businessman Mohye Saleh Kamel and others, according to the Wall Street Journal.

Saud al-Daweesh also appeared in videos shared on social media smiling and stating that he was treated decently.

“Private Affairs (a unit of the royal court) brought us a full lamb dish day and night. They treated us well and did a good job,” he said.

However, media reports on Monday confirmed the death of Saudi officer after he was subjected to torture at the Ritz-Carlton Hotel in Riyadh, where members of the royal family, ministers, and businessmen were detained earlier in November.

The detainees were arrested by Crown Prince Mohammed bin Salman (MbS) early in November over corruption charges, and held at Riyadh’s luxurious Ritz-Carlton hotel. Reports said they were offered freedom in exchange of their assets and cash.

Detained Jordanian billionaire businessman 'on way back to ....