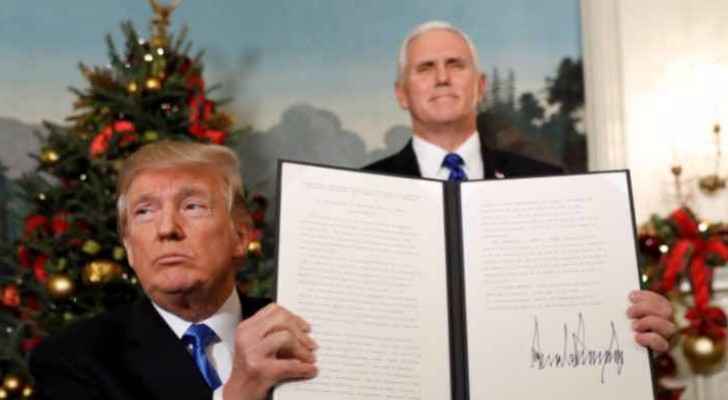 More than one hundred international artists, including actors, writers, musicians and filmmakers, denounced Trump’s decision to recognize Jerusalem as the capital of Israel, in a letter sent to The Guardian online newspaper.

Signatories said that Trump’s move helps “to erase Palestinians, as a political and cultural presence, from the life of their own city.”

They accused the Israeli government of subjecting Palestinians to a “creeping process of ethnic cleansing,” which will be worsened by Trump’s move to consider Jerusalem as the Israeli capital.

“In addition to the continuing policy of house demolitions, in the last 15 years at least 35 Palestinian public institutions and NGOs in occupied East Jerusalem have been permanently or temporarily closed by the occupying forces,” the letter said.

“Israeli authorities and entrepreneurs have spent millions in clearing Palestinian neighbourhoods to create 'heritage' projects that promote a myth of mono-ethnic urban identity, said to stretch back 3,000 years.”

Commenting on Trump’s decision, they said: “We reject Trump’s collusion with such racist manipulation and his disregard for international law. We deplore his readiness to crown the Israeli military conquest of East Jerusalem and his indifference to Palestinian rights.”

“As artists and as citizens, we challenge the ignorance and inhumanity of these policies, and celebrate the resilience of Palestinians living under occupation.”

It also said that Israel has been trying to achieve what they were seeking for the past 50 years through force of arms.