10 million dollars for any information leads to Trump removal 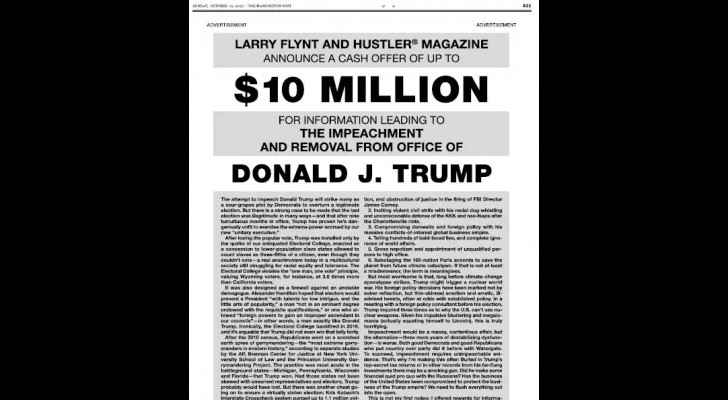 “$10 MILLION FOR INFORMATION LEADING TO THE IMPEACHMENT AND REMOVAL FROM OFFICE OF DONALD J. TRUMP.” This is what was written in an ad released in the Washington Post on Sunday’s edition, by Larry Flynt.

Flynt who is best known as the publisher of the pornographic magazine Hustler, is seeking anyone who can provide information that might lead to Trump’s punishment and removal from office.

The ad was published on a full page, without pictures and the text was bold and all-caps.

Flynt had marked reasons why he thought Trump should be removed from office, charging him with “compromising domestic and foreign policy with his massive conflicts-of-interest global business empire,” to “telling hundreds of bald-faced lies” and “gross nepotism and appointment of unqualified persons to high office,” according to the Washington Post.

“I feel it is my patriotic duty, and the duty of all Americans, to dump Trump before it’s too late,” Flynt told the Washington Post.

“All calls and correspondence will be kept strictly confidential,” was written at the end of the ad, preceded by “Call our hotline” prior to the phone numbers and the email address.