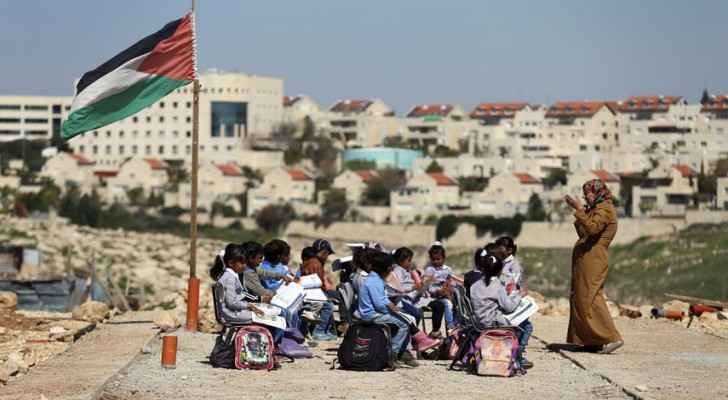 Israeli forces raided on Saturday a site where Palestinians were rebuilding a school that was demolished by Israeli authorities last month.

Activists at the village of Jubbet ad-Dib in the occupied West Bank, where the school is located, surrounded the area before they were attacked by Israeli forces with tear gas, grenades and bullets.

Fearing that the Israeli forces would destroy the school again, activists and workers continued to rebuild the mobile classrooms, which were supposed to serve 1st to 4th graders.

Israeli forces confiscated work tools from the builders, a spokesperson for the Israeli Civil Administration told Maan News in an email.

Rebuilding the Bethlehem school came to a half after Israeli forces fired tear gas at the workers.

The workers had already rebuilt five classrooms with concrete blocks overnight on Friday, before Israeli forces completely seized them, according to Maan News.

Meanwhile, the Israeli Civil Administration in the West Bank said in a statement: “We would like to emphasize that the Civil Administration works in cooperation with international organizations to promote projects for the residents of Judea and Samaria (the occupied West Bank), including soccer fields and schools. The Civil Administration has approved schools in Khirbet Atwani and in the village of Jaba, as well as establishing a school for the Palestinian Authority officials in Area C.”

According to Maan News, Palestinian President Mahmoud Abbas telephoned Walid Assaf, Chairman of the Palestinian Committee against the Wall and Settlements, who was at the school site at the time of the raid, to express his support for the project.
"The Palestinian people will remain firm in the face of the Israeli occupation," Abbas told Assaf, according to a statement from the Committee.

The Jubbet ad-Dib raid is just one of many raids carried out by Israeli forces.

Last month, at the beginning of the new school year, Israeli forces confiscated solar panels that powered a school in the Bedouin village of Abu Nuwar and demolished a kindergarten in the Bedouin community of Jabal al-Baba, triggering widespread international outrage.
According to the Norwegian Refugee Council (NRC), 55 schools in the occupied West Bank are threatened with demolition and stop-work orders by Israeli forces, an act described by the NRC as part of Israel’s “wider attack on education in Palestine.”