Google asks Americans if they're depressed - but what about Jordanians?

When “depression” is googled in the US, a box pops up with the option to “check if you’re clinically depressed.” 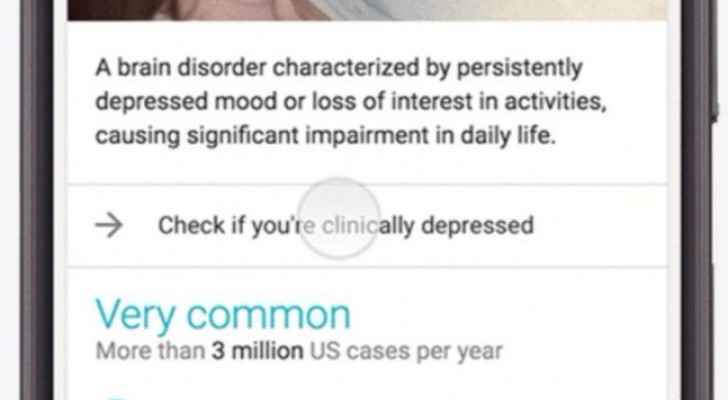 Google’s US search is now asking people if they are depressed.

People in the US who search for “depression” will automatically have the option to take a questionnaire to assess if they may be suffering from the illness, reported The Verge.

When “depression” is googled in the US, a box pops up defining the illness, listing its symptoms and possible treatments, and now, an option to tap on “check if you’re clinically depressed.”

The test, called PHQ-9, is private and is not meant to replace a mental health professional, but instead get people to seek help sooner than later, according to the US National Alliance on Mental Illness (Nami), who partnered up with Google for the project.

About one in five Americans experience an episode of depression in their lifetime, according to the National Alliance on Mental Illness. However, 50 percent leave it untreated.

Meanwhile in Jordan, 117 people committed suicide in 2016 - the highest figure recorded in the past six years - because of depression or mental health-related issues.

Surely this warrants the addition of Google's new feature to their Jordanian search engine? “Yes, we should have that feature, but as long as test-takers visit a psychiatrist after taking the test for a professional assessment.”

However, the idea seemed “terribly redundant” to psychotherapist Aaron Balick.

The doctor argued that persons googling depression will not find more useful information from a diagnostic test than what they have already read in the search results.

“A better approach would be some sort of acknowledgment that the searcher may be feeling down, and offering them resources and a direct line - perhaps a chat box - to local psychological services,” Dr. Balick told the BBC.

Gazan children 'are afraid of death' ....