A white supremacist rally in Charlottesville, Virginia, killing one person and injuring 19. (Twitter) 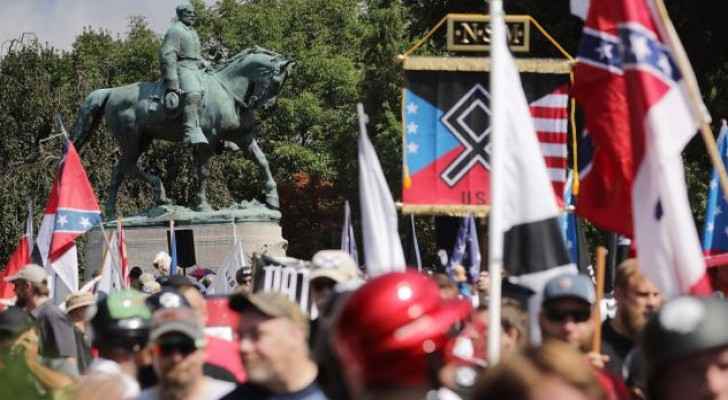 A man has been arrested and charged with murder after a car rammed into peaceful protesters demonstrating against a white supremacist rally in Charlottesville, Virginia, killing one person and injuring 19.

James Alex Fields, a 20-year-old from Ohio, is being held following the attack. He's been charged with one count of second degree murder, three counts of malicious wounding, and one count of hit and run attended failure to stop with injury.

According to police, a 32-year-old woman died in the attack and that they were attempting to notify her family before releasing more details.

The deaths came following a day marked by violent clashes between far-right nationalists and people who had come to protest against their occupation of a downtown park, containing a statue of the Confederate general Robert E Lee.

According to witnesses, people were peacefully protesting the white supremacist rally when the vehicle crashing into another car, throwing people over the top of it.

Charlottesville mayor Mike Signer tweeted: “I am heartbroken that a life has been lost here. I urge all people of good will – go home.”

Speaking at a press conference on Saturday evening, the governor of Virginia, Terry McAuliffe, who had earlier declared a state of emergency, told the white supremacists: “Go home … Shame on you. You pretend you are patriots, but you are anything but a patriot.”

U.S. President Donald Trump condemned the “violence on many sides”, but faced criticism for failing to directly denounce the far-right demonstrators.