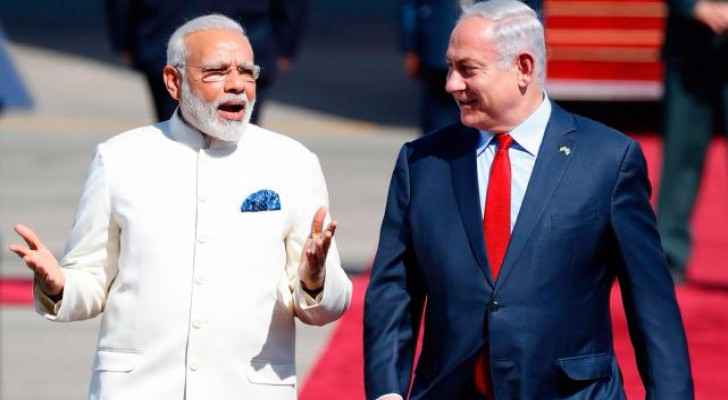 Prime Minister Narendra Modi arrived in Israel Tuesday for the first ever visit by an Indian premier, amid growing ties between the two countries including billions of dollars in defence deals.

Israeli Prime Minister Benjamin Netanyahu and other officials welcomed Modi with an official ceremony at Ben Gurion airport near Tel Aviv at the start of his three-day visit.

The two leaders embraced heartily and gave brief speeches, pledging to work together on issues including security, agriculture and energy.

Modi called the visit "groundbreaking," while Netanyahu said it was "historic". They are to have dinner later Tuesday before talks on Wednesday.

Israel, constantly searching for allies at the United Nations and for new business partners, has portrayed the visit as a major diplomatic victory.

Israeli analysts have noted that Modi is not scheduled to travel to Ramallah to meet Palestinian leaders during his three-day stay, as is common for visiting dignitaries.

Modi did however meet Palestinian president Mahmud Abbas in New Delhi in May.

India is the world's biggest importer of defence equipment, and Israel has become one of its major suppliers.

They also hope to build on cooperation in areas including water and agriculture technology, sectors where Israel has excelled.

The frost has further thawed in recent years, with India seeking closer defence ties -- particularly as it moves away from relying on traditional ally Russia for its military hardware.