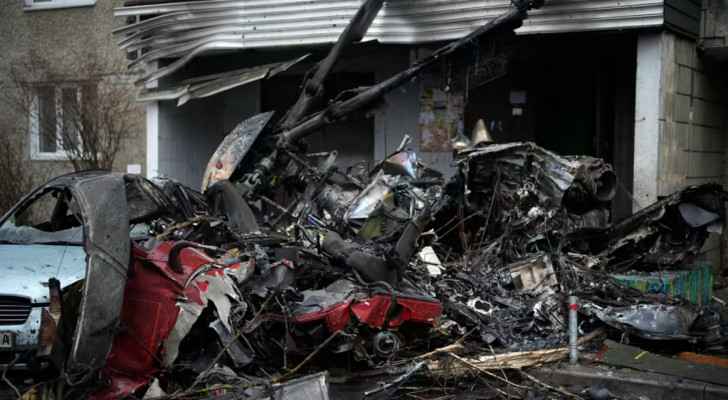 Ukrainian authorities on Thursday were investigating the circumstances surrounding a helicopter crash that killed the country's interior minister and 13 others, according to AFP.

Wednesday's crash outside Kyiv came as the head of NATO said at the annual World Economic Forum in Davos that allies were set to provide "heavier weapons" to the war-battered country.

Ukraine did not claim direct Russian involvement in the helicopter crash, but President Volodymyr Zelensky said the tragedy was a consequence of the war.

"There are no accidents at war. These are all war results," Zelensky said in English, appearing by video link at Davos.

He also renewed calls for modern, Western-designed heavy tanks, which analysts say are crucial to pushing through entrenched defensive lines in eastern Ukraine.

In a barely veiled reference to Germany, where Chancellor Olaf Scholz is weighing whether to greenlight the export of its highly regarded Leopard tanks, Zelensky issued a "call for speed".

"The time the Free World uses to think is used by the terrorist state to kill," Zelensky told delegates in Davos.

The statement came after NATO chief Jens Stoltenberg said the alliance would provide "more advanced support, heavier weapons and more modern weapons, because this is a fight for our values".

Meanwhile, in Washington, Under Secretary of Defense for Policy Colin Kahl said the United States was not "there yet" when it came to providing advanced Abrams tanks to Ukraine, though he did not completely close the door on a shift in the future.

The helicopter carrying Interior Minister Denys Monastyrsky crashed next to a kindergarten and a residential building in Brovary, a commuter town for the capital Kyiv that was the scene of fierce fighting with Russian forces last year.

Fourteen people were killed, including Monastyrsky, other ministry officials and a child, Zelensky said in his evening address to the nation. Another 25 people were wounded, including 11 children.

He added that an investigation had been opened "to clarify all the circumstances of the disaster".

"Minister Denys Monastyrsky, (his deputy) Yevhen Yenin and their colleagues who died in the crash are not people who can be easily replaced," Zelensky said. "It is a truly huge loss for the state. My condolences to the families."

Dmytro Serbyn, who was in his apartment when the helicopter crashed, rushed to help children as soon as he saw flames billowing over the kindergarten.

"They were looking for their parents, children were crying... their faces were cut and covered in blood," Serbyn told AFP.

"We pulled out one girl. I wrapped her in a jacket, her face was wounded... She did not tremble, did not cry."

The child, Polina, was so badly injured that her father did not immediately recognise her, Serbyn told AFP.