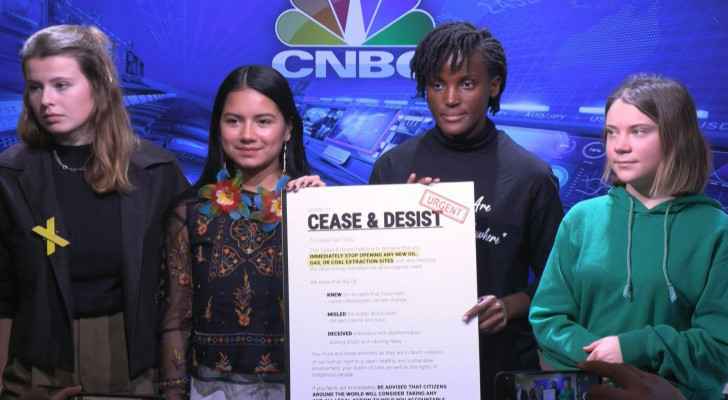 Swedish climate activist Greta Thunberg slammed business and political leaders attending the World Economic Forum in Davos Thursday, saying it was "absurd" to listen to them while they fuelled "the destruction of the planet."

Two days after police briefly detained her at a protest against a coal mine in Germany, Thunberg and other young campaigners took part in a debate on the sidelines of the summit of global investors, CEOs and political leaders in the Swiss Alps.

"We are right now in Davos where (there are) basically the people who are mostly fuelling the destruction of the planet," the 20-year-old said, explaining that the world should not rely on them "for solving our problems."

She added that it was "absurd... we seem to be listening to them rather than the people who are actually affected by the climate crisis."

"Without massive public pressure from the outside, these people are going to go as far as they possibly can... They will continue to throw people under the bus for their own gain," she said.

The Swede spoke on the sidelines of the WEF with fellow activists Helena Gualinga of Ecuador, Vanessa Nakate of Uganda and Luisa Neubauer of Germany at a CNBC panel that included International Energy Agency head Fatih Birol.

The Swede made a splash when she attended the forum as a teenager in January 2020, warning that "our house is still on fire" and complaining that her demands had been "completely ignored."

Then-US president Donald Trump used his speech at the same forum to bash "the perennial prophets of doom" as Thunberg looked on stony-faced from the audience.

This week, she and Gualinga, Nakate and Neubauer launched an online petition demanding that energy firms stop any new oil, gas or coal extraction projects -- or face possible legal action.

More than 900,000 people had signed the petition by Thursday.

"We are taking a very dangerous path. We are already seeing how people are suffering on the ground," Gualinga said.

"It's completely insane that we are allowing this and we have people here in Davos that are enabling that, through government, through investing in fossil fuel and at some point there needs to be a stop. This is criminal behaviour," she said.

Nakate struggled to hold back tears as she recounted witnessing the impact of a drought in the Horn of Africa.

"I am frustrated and I'm so hurt by what is happening and the inaction," she said, lamenting that Africa was "an afterthought."

Birol, as head of a multilateral energy agency that advises mostly Western governments, said that his presence alongside activists was "a very important signal that I want to give the world."

The energy sector had to be transformed or "we have no chance whatsoever to reach our climate targets."

The IEA said in a report in October that the energy crisis triggered by Russia's invasion of Ukraine was causing changes that could hasten the transition to a "more sustainable and secure energy system."

Thunberg was among a group of people hauled away by police Tuesday during a protest near the German village of Luetzerath, which is being razed to make way for a coal mine expansion.

Notably, they were not formally arrested.

Climate change is a major topic at the World Economic Forum, where businesses and governments have come under pressure to do more to ensure that the world meets the increasingly elusive goal of limiting warming to 1.5 degrees Celsius.

Past eight years hottest ever recorded, ....