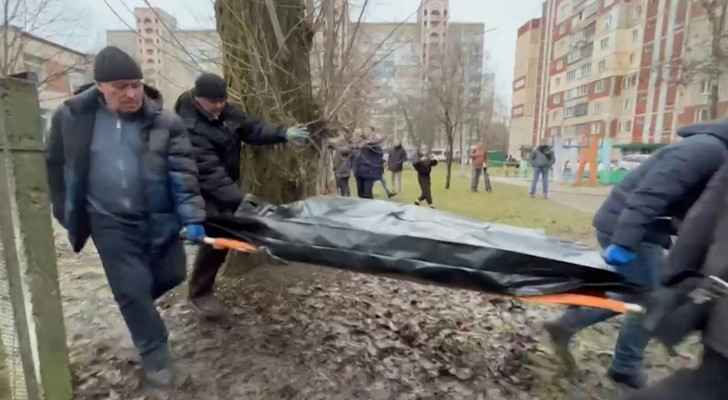 Rescuers called off the search on Tuesday for victims of the Russian missile strike in the city of Dnipro with 20 people still missing and funerals being held in the grief-stricken Ukrainian city, according to AFP.

After the carnage, the Ukrainians pressed ahead with talks to obtain more Western weapons, and Ukraine's army chief Valery Zaluzhny met Mark Milley, Chairman of the US Joint Chiefs of Staff, for the first time in person in Poland.

Ukrainian authorities said on Tuesday the Russian strike in the eastern city of Dnipro at the weekend killed at least 45 people including six children.

One of the bodies recovered from the rubble Tuesday was that of a child.

The toll made Saturday's strike one of the deadliest attacks since Russian President Vladimir Putin entered Ukraine nearly 11 months ago.

The Kremlin denies responsibility for the strike that also injured 79 people, including 16 children.

"He gave many a start in life," said Taras Ivanov, whose son trained with coach Korenovsky.
"This loss has affected our family," the father told AFP, calling Korenovsky a "legend." "Everything inside me is shaking."

Artem Biryukov said Korenovsky was like a "second father" to him. "Thanks to him I became who I am now," he said.

Ukrainian leader Volodymyr Zelensky reiterated his pledge that everyone who had "caused this terror" would be found and held to account.

Municipal workers clearing out the partially collapsed Soviet-designed housing block removed more than 9,000 tonnes of construction debris and over 40 damaged cars since the rescue work began on Saturday.

At 1:00 pm (1100 GMT), emergency services said the search and rescue operations at the site of the rocket attack were completed.

In Moscow, a few residents laid flowers in the snow in memory of those killed in the weekend strike, at the monument to the famous Ukrainian poet Lesya Ukrainka.

Kyiv has called for more weapons to defend itself, and at the weekend received pledges of British tanks. On Tuesday the head of Ukraine's armed forces, Zaluzhny, said he had met Milley, the top US general, for the first time in person in Poland.

"I outlined the urgent needs of the armed forces of Ukraine," he said.

Germany announced on January 5 that it was following the United States in sending one of the advanced missile defense batteries to Ukraine.

Dutch Prime Minister Mark Rutte signaled his "intention" Tuesday during a meeting with President Joe Biden to follow Germany in its delivery of US-made Patriot air-defense missiles to Ukraine.

"We have the intention to join what you're doing with Germany on the Patriots project, the air-defense system," Rutte told Biden in the White House.

Putin warned more armaments would only intensify fighting and the Kremlin vowed to burn the materiel.

US elder statesman Henry Kissinger said Tuesday that Russia's offensive showed there was no longer a point to keeping Ukraine out of NATO, Kyiv's long-held aspiration which he had previously opposed.

The Russian missile strike triggered the resignation of a high-profile Ukrainian official who had sparked an outcry by suggesting air defence could have been responsible by intercepting a Russian missile, which then fell on the building.

The Ukrainian army said the apartment block was hit by an X-22 Russian missile that it does not have the capacity to shoot down.

Ukraine said Tuesday that fighting was continuing across the frontline.

Outside the city, servicemen dug new trenches while tanks and armoured vehicles rolled past.

"It's like Verdun out there," said Ivan, a military ambulance driver, referring to the notorious World War I battle.

Uncertainty still surrounded the fate of the war-scarred eastern town of Soledar that Russia claims to have captured.

Capturing Soledar could improve the position of Russian forces as they push toward what has been their main target since October, the nearby transport crossroads of Bakhmut.

Both sides have conceded heavy losses in the battle for the town.

A Ukrainian military spokesman said on Tuesday that fighting was ongoing.

The deputy head of Ukraine's presidential office, Kyrylo Tymoshenko, said two people had been killed in the southern regions of Mykolaiv and Kherson by Russian shelling.

He also said two civilians were killed in the eastern region of Donetsk, which has been the epicenter of fighting in recent months.