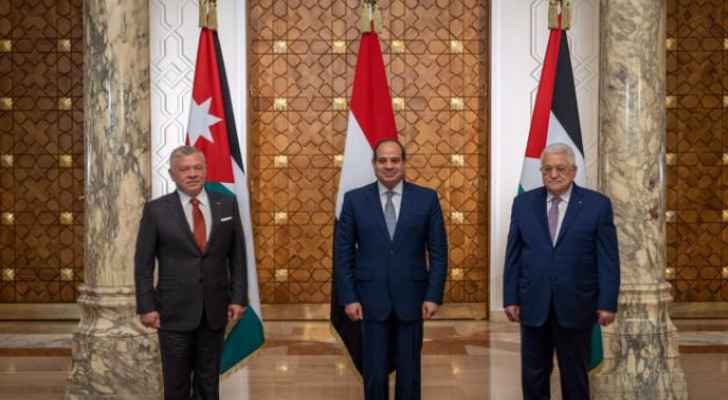 In a joint communique released following the summit, the leaders reaffirmed the need to safeguard the legitimate rights of the Palestinian people, and to continue joint efforts to reach just, comprehensive, and lasting peace, on the basis of the two-state solution.

The leaders agreed to maintain consultation at all levels within the Jordanian-Egyptian-Palestinian coordination framework, in order to crystalize a vision for activating efforts to relaunch negotiations, while working with Arab leaders and partners to reactivate the peace process, according to the communique.

Furthermore, they stressed the need to cease all illegal unilateral Israeli measures that undermine the two-state solution and the prospects of achieving just and comprehensive peace.

The leaders, according to the communique, also highlighted the need to preserve the historical and legal status quo in Jerusalem’s Islamic and Christian holy sites.

Presidents El Sisi and Abbas reaffirmed the importance of the Hashemite Custodianship of Islamic and Christian holy sites in Jerusalem, and its key role in protecting these sites and their inherent Arab Muslim and Christian identities.

King Abdullah and President Abbas expressed appreciation of Egypt’s efforts in maintaining calm in Gaza and supporting efforts to rebuild the strip, stressing the international donor community’s responsibility towards supporting the rebuilding efforts.

The leaders also underscored the importance of maintaining the international community’s support for UNRWA, to enable it to continue providing its vital services for Palestinian refugees.

Prior to the trilateral summit, the King also held bilateral talks with President El Sisi in Cairo.

King orders assistance to those affected by Turkey ....

King orders assistance to those ....