UK strikes to intensify as teachers and nurses announce walkouts

UK strikes to intensify as teachers and nurses announce walkouts 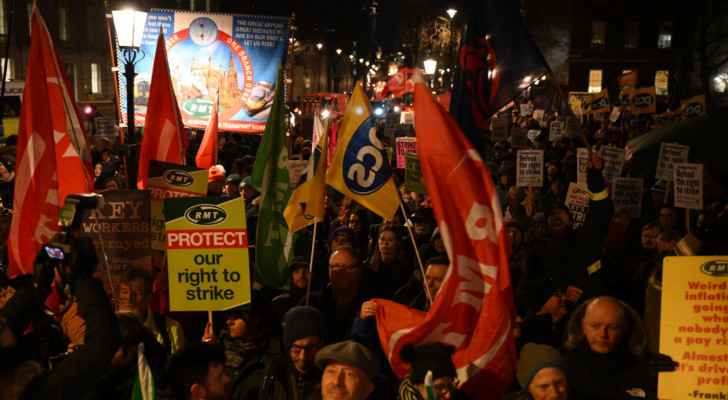 Industrial action looked set to intensify Monday as Britain's largest teaching and nursing unions announced further walkouts over pay, while the government seeks to limit strikes with a controversial bill, according to AFP.

The National Education Union (NEU) said its members voted overwhelmingly to walk out from February 1, calling for an above-inflation pay rise to counteract soaring prices and energy bills.

This week nurses in England, Wales and Northern Ireland are due to resume strike action on Wednesday and Thursday after holding their first ever strikes in December.

The Royal College of Nursing announced that "if political inaction continues" it will follow this with further strikes on February 6 and 7, "in our most intense protest against unfair pay and unsafe staffing yet."

The Conservative government has presented MPs with a bill that would require unionized professions to provide a minimum level of service during strikes.

Business minister Grant Shapps told MPs during a second reading Monday evening that the bill was needed because "we have seen in recent months a flare-up of strikes that are putting people's lives and livelihoods at risk."

MPs from the opposition Labour Party spoke against the bill.

"They want to stop all protest, it feels like," Liz James, a housing cooperative representative of Unison, a trade union that mainly represents public service workers, told AFP.

"The only thing, as a worker, we have our right to is to withhold our labour."

"We've all been affected by draconian strike laws since the 1980s. This is a different attack on a different group of workers but you're foolish to think that you're not the next ones in line," said Paul Fleming, general secretary of acting union Equity.

Public sector workers since last summer have been holding a wave of walkouts for salaries to take into account double-digit inflation.

The NEU announced a national strike day on February 1, followed by a series of more regional strikes over six days in February and March.

It said each school will only be affected for four days.

But it will cause immediate concern among parents, who have seen their children's education severely disrupted in recent years by the coronavirus pandemic.

"We believe the government knows there needs to be a correction on teacher pay," NEU joint general secretary Kevin Courtney said in a live-streamed meeting with members.

"We really do hope we don't have to take any of these proposed strike days."

The teaching union leaders are set to meet the education minister Gillian Keegan on Wednesday.

The minister told Sky News that the planned strike action "is deeply disappointing for parents and for children and it will have an impact on children."

Members of the Educational Institute of Scotland union on Monday began 16 days of rolling stoppages until February 6. There have been previous strikes in December and earlier this month.

Paramedics and ambulance workers are set to decide this week on further strike action, heaping pressure on the state-run National Health Service as it battles to recover from Covid delays to treatment and a staffing crisis.

Children among 8 killed in Russian strikes on Syria's ....

Children among 8 killed in Russian strikes on ....

Children among 8 killed in Russian strikes on ....

Children among 8 killed in Russian ....