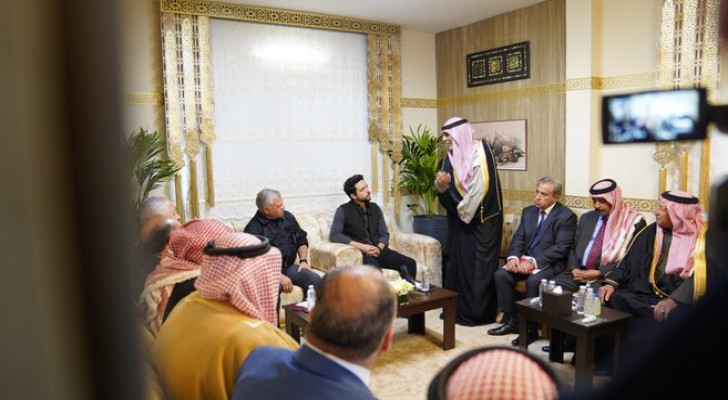 His Majesty King Abdullah II Sunday highlighted the importance of further developing the city of Petra, and diversifying its tourism product, as well as capitalising on it being one of the New Seven Wonders of the World.

During a visit to Petra that included a meeting with representatives of the local community and touring the Petra Museum and a productive kitchen project, King Abdullah said developing tourism services in the “Golden Triangle” of Petra, Wadi Rum, and Aqaba, will have a positive impact on Petra and Jordan at large.

His Majesty, who was accompanied by His Royal Highness Crown Prince Al Hussein bin Abdullah II, called for maintaining coordination and bolstering cooperation with Arab countries in the tourism sector, in light of strong regional competition in the field.

The King noted the continuous rise in the number of visitors to Petra, which calls for expanding investments in the tourism sector, as well as improving the infrastructure, and advancing services to keep up with the evolving needs of the tourism sector.

Representatives from the local community presented a number of suggestions for developing the city and enhancing services to visitors and tourists, in addition to promoting Petra as a tourism destination.

During a visit to the Petra Museum, His Majesty listened to a briefing by Petra Development and Tourism Region Authority (PDTRA) Chief Commissioner Suleiman Farajat on the artefacts on display, excavated in Petra and the surrounding areas.

Farajat said the museum seeks to diversify the tourism product for Petra visitors, preserve the archaeological site, and extend visitors’ stay, which would increase tourism receipts.

Also during the visit, His Majesty stopped at the Petra Kitchen, founded in 2004 by Eid Nawafleh to introduce tourists to Jordanian and Arabic cuisine through evening classes.

The Petra Kitchen offers tourists the opportunity to cook and try traditional Jordanian and Levantine dishes, supervised by skilled chefs from the local community.

Nawafleh said the project aims to encourage the residents of Wadi Musa and Petra to start businesses that enrich tourists’ experience.

According to the PDTRA, the Petra region’s revenues in 2022 rose to JD18.1 million, increasing by nearly 117 percent compared to 2021.

The PDTRA has completed 12 projects over the past four years at an estimated cost of JD 31 million, while providing some 1,500 jobs in the hospitality sector in 2022, an increase of 49 percent compared to 2018.

Royal Hashemite Court Chief Yousef Issawi, Director of the Office of His Majesty Jafar Hassan, and Tourism Minister Makram Queisi accompanied the King on the visit.

King orders assistance to those affected by Turkey ....

King orders assistance to those ....