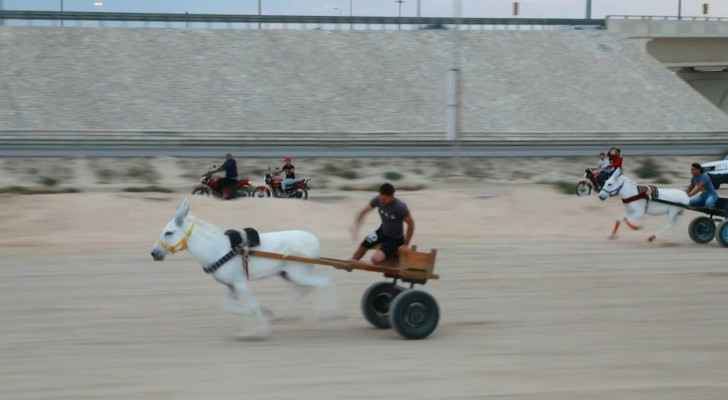 Donkeys pulling wooden carts churn up the desert dust as they race down a track in Bahrain, the riders whipping their backs with sticks as an excited crowd looks on.

The spectators erupt into a roar as one of the animals, nicknamed "The Million," takes the lead and clinches first place in the 700-meter race.

When it's all over, the excited fans flock to take pictures with the winning donkey and the owner who is standing on its back, holding the trophy into the air.

These informal races, held by the side of a busy highway, are condemned by animal rights activists, but they are a cherished tradition for local villagers.

"We can't wait for Fridays to come so we can take part in the races," said Yasser Mahdi, a donkey-cart racer whose animal, like the others, was decorated with orange dye.

"We see many people flock to the track every week," he said at the makeshift track in Saar village west of Manama, the capital of the tiny island-nation.

The races are popular during the cooler winter months. In Saar, they are free for both spectators and participants and draw sponsorship from local businesses.

Donkey racing, also popular in Pakistan and Morocco, is a traditional sport in the Gulf state of Bahrain, but it is a practice that appals animal rights groups.

"It seems that donkey racing in Bahrain is a primitive race with no standards or rules to protect these animals," said the International Fund for Animal Welfare (IFAW).

The group said in an emailed statement justifying the practice by claiming it was a long-standing tradition is "unacceptable".

"It's illogical to consider anything being traditional as a reason for it to be acceptable," the IFAW added.

The races are not officially endorsed by Bahrain's government, a signatory to the Gulf Cooperation Council's animal welfare law which prohibits unlicensed races and the use of excessive force in competitions.

The races are limited to 10 donkeys, and they are held at beginner, intermediate and levels.

"The race is fun and we always make sure we attend or take part," said Jaafar Saleh, a racer aged in his twenties. "We hope that these races will keep growing."