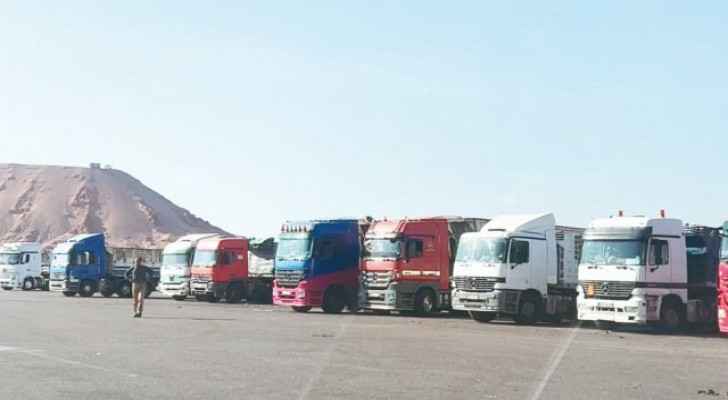 Truck owners and drivers are still on a strike against transporting goods and commodities from the ports of Aqaba and Mafraq to their final destinations, rejecting the agreement that took place on Monday between the Transport Regulatory Authority and the Syndicate of Jordanian Truck Owners.

Truck drivers and owners also rejected the syndicate’s announcement that they had reached an agreement to return to work starting Wednesday.

Chairman of the Syndicate of Jordanian Truck Owners Mohammad Al-Daoud said that the wages will be determined according to a guiding regulation issued by the authority, and will be similar to the transport wages regulation in force and approved by the Ministry of Industry and Trade, provided that the new wages are subject to the fuel pricing equation, whether it increases or decreases, starting from the beginning of 2023.

Daoud added that the agreement, which will be implemented on Wednesday, included adding an amount of JD 1.5 to the transportation fees for phosphate, potash, and sulfur.

He pointed out that the agreement also included raising the price of shipping containers to JD 500 instead of JD 448, up to the weight of 25 tons per container on the Amman-Aqaba route, according to the Jordan News Agency, Petra.

He spoke about an agreement with the Ministry of Transport and the Transport Regulatory Authority to form a committee to discuss a number of challenges facing the sector.

For their part, the drivers said that they do not accept the agreement and they were not consulted, stressing that the strike will continue in all regions of the Kingdom until all “their demands are met.”

The strike comes as a protest against the increase in fuel prices and the failure to raise the minimum transportation wage for four consecutive years.

In a statement issued by the drivers on Monday, the owners of companies carrying goods and commodities demanded a retraction of the fuel price hike that took place in the last two months, in addition to raising the minimum wage by no less than 40 percent, and linking the rise and drop of the fuel price to wages in a meaningful way.