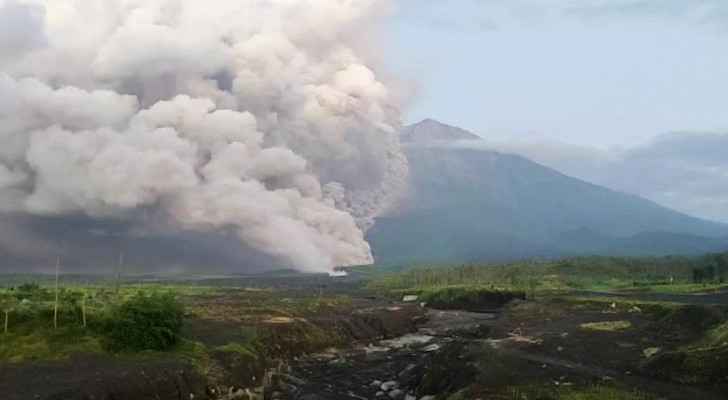 Indonesia's Mount Semeru erupted Sunday spewing hot ash clouds a mile into the sky and sending rivers of lava down its side, prompting authorities to raise the alert status to the highest level.

The eruption of the highest mountain on Indonesia's main island of Java, around 800 kilometers (500 miles) southeast of the capital, Jakarta, sparked evacuations of nearby villages exactly one year after its last major eruption killed dozens of people.

"Hot avalanches" caused by piles of lava at the tip of the 3,676-metre (12,000 feet) volcano slid down after the eruption, National Disaster Mitigation Agency spokesperson Abdul Muhari said in a statement.

No casualties or injuries were reported immediately after the eruption but Gunawan warned nearby residents not to travel within eight kilometres (five miles) of the crater after the threat level was raised to four.

Shelters were being prepared for nearby residents who were evacuating, Gunawan said.

Videos shared with AFP by local rescue group Irannala Rescue showed a huge black cloud rising from the volcano's crater, engulfing the sky and blocking the sun in nearby villages.

The villages were being battered by monsoon rains by the afternoon and the rainfall was mixing with volcanic ash, according to Kompas.

Residents were also told to avoid a southeastern area 13 kilometres (8 miles) along a river in the direction where the ash was traveling.

"A lot of people have started to go down," Thoriqul Haq, the local administration chief for Lumajang, where the volcano is located, told Kompas TV.

Most residents in the two most-threatened villages have evacuated themselves, said Patria Dwi Hastiadi, spokesperson of the Lumajang Disaster Mitigation Agency.

Japan's weather agency had earlier warned that a tsunami was possible in the southern islands of Miyako and Yaeyama in Okinawa prefecture, Kyodo news agency reported, but there were no reports of damage an hour after its projected arrival.