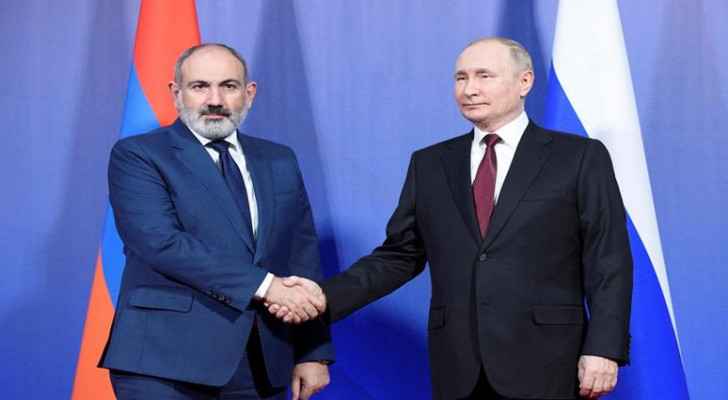 Armenian Prime Minister Nikol Pashinyan on Wednesday accused a Moscow-led security group of failing to give protection to his country in the face of aggression from arch-foe Azerbaijan, according to AFP.

Yerevan had accused Azerbaijan of occupying a pocket of its land seized in September in fierce clashes between the neighbors, which left more than 280 people dead.

Armenia is a member of the Collective Security Treaty Organization (CSTO), a Moscow-led grouping of several ex-Soviet republics.

It is "depressing that Armenia's membership in the CSTO has failed to contain Azerbaijani aggression," Pashinyan said Wednesday during the organization's heads of state summit in Yerevan, which was attended by Russian President Vladimir Putin.

"This fact is hugely damaging to the CSTO's image both in our country and abroad," the Armenian leader said.

"We have failed so far to make a decision on CSTO's reaction to Azerbaijan's aggression against Armenia," Pashinyan added.

Armenia in September had asked for military help from Moscow, which is obligated under the treaty to defend Armenia in the event of a foreign invasion.

But the Kremlin -- which also has close ties with Baku -- did not rush to help Yerevan and the CSTO responded only by sending its secretary general to the conflict zone and offering to set up a working group to analyze the situation.

On Wednesday evening, Pashinyan met with Putin on the sidelines of the Yerevan summit to discuss the Azerbaijan problem.

Kremlin spokesman Dmitry Peskov said the CSTO was a "necessary" organization whose services were "very much in demand" to resolve regional conflicts".

"It is very important that Armenia and Azerbaijan agree on a peace treaty" added Peskov, who was also in Yerevan.

"This is our main task. And we all have to do our utmost to... make it happen," he told reporters after the summit meeting.

Armenia and Azerbaijan fought two wars -- in the 1990s and in 2020 -- over Azerbaijan's Armenian-populated enclave of Nagorno-Karabakh.

The six weeks of fighting in autumn 2020 claimed the lives of more than 6,500 troops from both sides and ended with a Russian-brokered ceasefire.

Under the deal, Armenia ceded swathes of territory it had controlled for decades, and Moscow deployed about 2,000 Russian peacekeepers to oversee the fragile truce.

However, sporadic clashes continue to occur, despite the presence of Russian troops.

Ethnic Armenian separatists in Nagorno-Karabakh broke away from Azerbaijan when the Soviet Union collapsed in 1991. The ensuing conflict claimed around 30,000 lives.