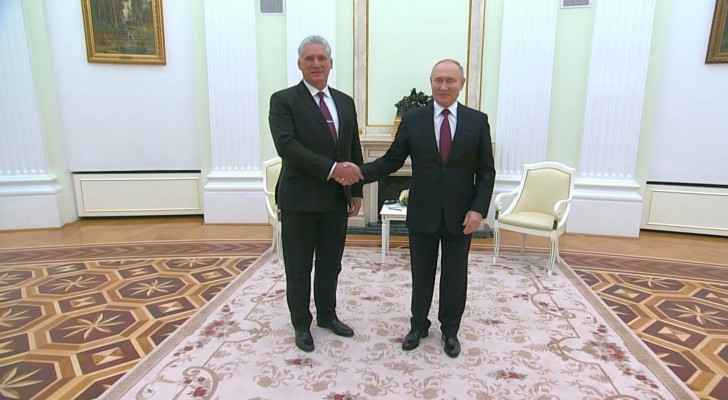 The two also unveiled a bronze monument to Fidel Castro in the capital Moscow, with Putin praising the Cuban revolutionary as a "bright" man.

The Kremlin chief, who has been seeking to pivot Russia from the West after he sent troops to Ukraine in February, praised Moscow's decades-old friendship with Cuba and said the two countries needed to ramp up cooperation further.

"We have always opposed various kinds of restrictions, embargoes, blockades, and so on," Putin told the Cuban leader at the Kremlin, welcoming that Havana backed Moscow on the international arena in return.

Diaz-Canel said for his part that the visit to Moscow had a "profound" meaning.

"First of all it is taking place as both countries -- Russia and Cuba -- are subject to unfair and arbitrary sanctions that continue, and they have a common enemy, the Yankee empire that manipulates a large part of the world," he said in the Kremlin.

Diaz-Canel backed Russia in its confrontation with the West, saying Moscow should stand firm.

Russia's influence in Cuba waned with the break-up of the Soviet Union in 1991 but it has been making a comeback.

Cuba has been under US sanctions for more than six decades, while Russia has been slapped with unprecedented Western sanctions after Putin launched a military operation in Ukraine on February 24.

Diaz-Canel hopes the visit to Russia will help boost his country's struggling energy sector in the midst of prolonged blackouts and fuel shortages.