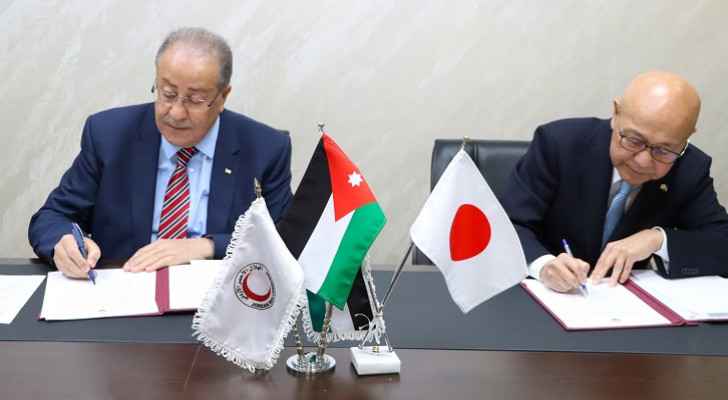 The Government of Japan has extended a grant of USD 51,341 to Jordan National Red Crescent Society for provision of an ultrasound machine to its hospital under the scheme called Grant Assistance for Grass-roots Human Security Projects (GGP).

A grant contract was signed by Mr. OKUYAMA Jiro, Ambassador of Japan to the Hashemite Kingdom of Jordan and H.E. Dr. Mohammad Al-Hadid, President of the Society, during a ceremony on Nov. 20, 2022.

This grant assistance aims to enhance the quality of medical services provided at Jordan Red Crescent Hospital by renewal of a current old ultrasound machine. The hospital is located only 0.5km away from Al-Wehdat refugee camp, and has played a significant role in provision of medical services to the underprivileged population including residents of the camp. However, the current ultrasound machine in the hospital’s radio-diagnostic unit has been used for a long time, and it needs to be replaced. With a brand new machine funded by GGP, it is expected that patients will be able to take diagnostic services by ultrasonography more rapidly and accurately.

At the signing ceremony, Ambassador OKUYAMA expressed his gratitude to the Society’s great social contribution and stated: “The coronavirus outbreak caused a significant economic impact in Jordan, increasing the national poverty rate to 24.1%, and made it more difficult for the underprivileged population to access to necessary medical services. That makes the role of Jordan Red Crescent hospital increasingly important for vulnerable people. We sincerely hope that this Japanese support will help underprivileged patients and contribute to the realization of Universal Health Coverage.”

In his response, President of Jordan Red Crescent Dr. Mohammad Al-Hadid said: “This generous contribution embodies the long and profound relationship that we enjoy with Japan. Over the years, Jordan Red Crescent Hospital received several donations that were important to the services that we provide, such as the kitchen, the laundry room and the X-Ray department which was inaugurated by Empress Masako in 1995. Moreover, the Society’s Crisis Management Center was established in 2020 with the support of the Japanese government. We at Jordan Red Crescent hail such partnership as it strengthens our capacities in responding to the needs of the targeted people in the community.”

Under Japanese Grant Assistance for Grass-Roots Human Security Projects, Japan has extended more than 10 million US Dollars for 155 projects to non-governmental organizations, schools, hospitals, and local governments in Jordan since 1993.

Russian nuke use would be 'act of hostility against ....

Russian nuke use would be 'act of hostility ....

Russian nuke use would be 'act of hostility ....