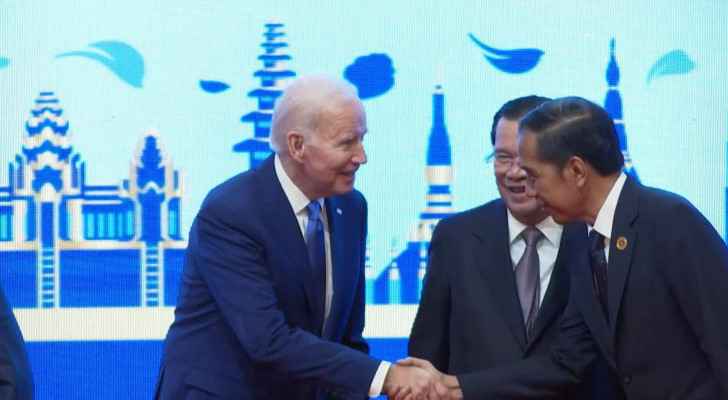 US President Joe Biden arrived in Asia on Saturday vowing to urge Chinese leader Xi Jinping to rein in North Korea when they hold their first face-to-face meeting at next week's G20 summit.

Biden met Southeast Asian leaders in Phnom Penh ahead of his encounter with his Chinese counterpart on Monday in Bali.

The meeting between the two powers comes after a record-breaking spate of missile tests by North Korea sent fears soaring that the reclusive state would soon conduct its seventh nuclear test.

In Monday's meeting on the sidelines of the G20 summit, Biden will tell Xi that China -- Pyongyang's biggest ally -- has "an interest in playing a constructive role in restraining
North Korea's worst tendencies", US National Security Advisor Jake Sullivan told reporters.

Biden will also tell Xi that if North Korea's missile and nuclear build-up "keeps going down this road, it will simply mean further enhanced American military and security presence in the region".

Sullivan said Biden would not make demands on China but rather give Xi "his perspective".

This is that "North Korea represents a threat not just to the United States, not just to (South Korea) and Japan but to peace and stability across the entire region".

Whether China wants to increase pressure on North Korea is "of course up to them", Sullivan said.

However, with North Korea rapidly ramping up its missile capacities, "the operational situation is more acute in the current moment", Sullivan said.

Tokyo and Seoul have been increasingly alarmed by the North Korean testing blitz, which included an intercontinental ballistic missile.

South Korean President Yoon Suk-yeol's office said that, because of the rising tensions caused by the North's missile launches, he would hold a one-on-one summit with Kishida in Phnom Penh on Sunday.

Biden and Xi, the leaders of the world's two biggest economies, have spoken by phone multiple times since Biden became president in January 2021.

But the Covid-19 pandemic and Xi's subsequent aversion to foreign travel have prevented them from meeting in person.