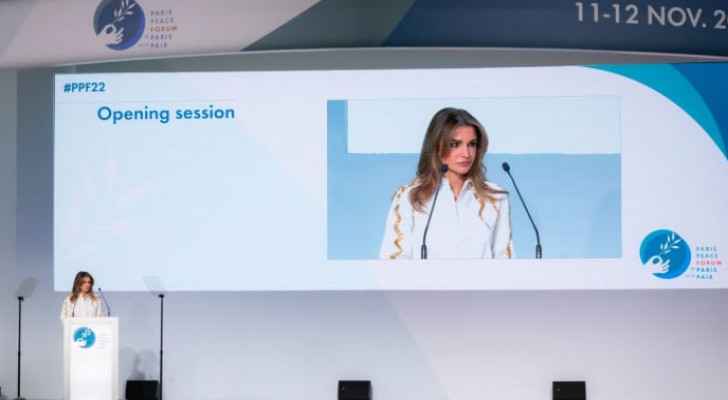 Her Majesty Queen Rania Al Abdullah urged the international community to embrace a paradigm shift in its response to the world’s multiplying crises, calling on all stakeholders to “treat this moment like the shake-up it is.”

Speaking at the fifth edition of the Paris Peace Forum on Friday, Queen Rania noted that the world is facing “a convergence of crises,” including the COVID-19 pandemic, war in Ukraine, climate change, inequality, and a general erosion of trust. “Yet, too often, we are failing to meet our common threats with a spirit of common cause,” she said.

“Our world is off-balance; simply trying to keep things steady is not enough,” Her Majesty stressed, calling for four critical realignments in humanity’s approach to shared challenges: “Renewing our faith in truth, recognizing that we all have equal worth, safeguarding the future, and believing in our ability to remake the world as we wish it could be.”

Expanding on the first measure, the Queen underscored the importance of speaking the truth and following up words with real action. “Honesty is the foundation of trust, but words are not enough. Cynicism flourishes in the gap between words and deeds,” she said.

Citing the world’s response to climate change as an example, Her Majesty highlighted the “chasm between promises and policies,” noting the stark contrast between pledges made as part of the 2015 Paris Agreement to prevent global temperatures from rising, and recent UN climate report findings, which estimate that “temperatures will rise a full degree past safe conditions.”

“It’s too late for wish lists,” Queen Rania cautioned. “We need binding to-do lists to save both our credibility and our planet.”

Moving on to the second realignment of the paradigm shift, Her Majesty emphasized the importance of honoring our common humanity, particularly with regards to refugee populations. “Self-sufficiency is an illusion,” she said. “Until we embrace the reality of our connectedness, we’ll continue to bear the worst of its consequences.”

The Queen explained that the global refugee crisis has reached “epic proportions” with the number of displaced people around the world now exceeding 100 million, equal to “one-and-a-half times the population of France.” She also highlighted the difference in reception of refugees from Ukraine to those from countries such as Syria, Myanmar, and South Sudan, who had also been driven from their homes.

“What accounts for the contrast in compassion? Does skin color make all the difference?” she asked. “Too often, the barrier isn’t budgets. It’s bigotry and bias.”

Elaborating on the third aspect of the paradigm shift, the Queen stated “we have to act in the service of future generations,” clarifying that our choices will directly impact those who will inherit our legacy, even if we will never meet them in our lifetimes.

Reaching the paradigm shift’s final necessary realignment, Her Majesty made clear the need for “renewing hope and confidence in ourselves.”

“Despite the multi-crises we face, humanity has made enormous progress,” she reflected, relaying that, over the past few decades, one billion people have risen out of extreme poverty, infant mortality has fallen by more than half, and more children are attending school and less are going hungry.

“It’s not just technology that’s enabled these wins,” the Queen continued. “It’s collaboration and trust. The instinct to help. The goodness that resides in human hearts.”

Explaining that hope resides in our ability to believe that things can improve, Queen Rania encouraged the audience to resist complacency and try to anticipate crises earlier, “so that we can fix problems before they become perils, and prevent tomorrow’s crises before they start,” she said.

Launched in 2018, the Paris Peace Forum convenes yearly with the aim of contributing to bridging the governance gap by bringing together multiple stakeholders to advance concrete solutions to global problems where none exist. The annual event is often attended by public and private organizations from around the world that present their governance projects to global leaders, elected officials, experts, and other stakeholders.