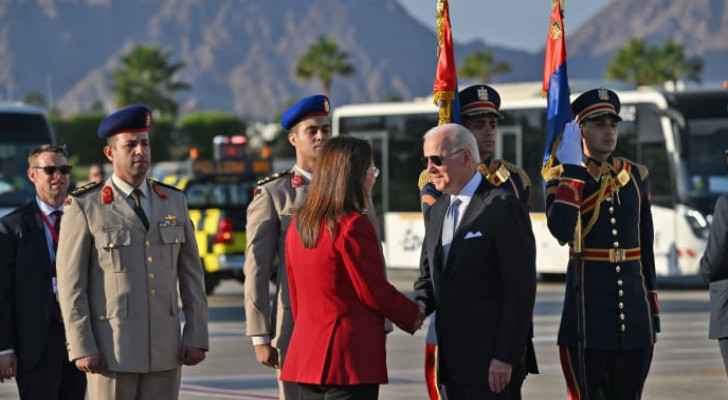 US President Joe Biden arrived at UN climate talks in Egypt on Friday armed with major domestic achievements against global warming but under pressure to do more for countries reeling from natural disasters.

Biden will spend only a few hours at COP27 in Sharm el-Sheikh, three days after US midterm elections that have raised questions about what the result could mean for US climate policy.

Climate action in the United States -- the world's second biggest emitter -- was given a major boost this year when Congress passed a landmark spending bill, the Inflation Reduction Act, which includes $369 billion for clean energy and climate initiatives.

"We're living in a decisive decade –- one in which we have an opportunity to prove ourselves and advance the global climate fight," Biden said on Twitter, hours before Air Force One flew over the conference venue at the Red Sea resort.

"Let this be a moment where we answer history's call. Together," said the US leader, who skipped a two-day summit of about 100 world leaders at COP27 earlier this week that coincided with the US election.

New research shows just how dauntingly hard it will be to meet the goal of capping global warming at 1.5 degrees Celsius above preindustrial levels -- requiring emissions to be slashed nearly in half by 2030.

The new study -- published on Friday in the journal Earth System Science Data -- found that CO2 emissions from fossil fuels are on track to rise one percent in 2022 to reach an all-time high.

COP27 talks have been dominated by the need for wealthy polluters to stop stalling on helping developing countries green their economies and prepare for future impacts -- alongside calls to provide financial help for the catastrophic damage already apparent.

"The world needs the United States to be a climate leader in our fight for climate justice," prominent Ugandan climate activist Vanessa Nakate, a 25-year-old Goodwill Ambassador for UNICEF, told AFP.

Germany's climate envoy, Jennifer Morgan, told reporters that Biden's attendance at COP27 was a "very good sign" that reassures other countries that "the United States at the highest level takes this issue incredibly seriously".

US climate envoy John Kerry presented this week a public-private partnership aimed at supporting the transition to renewable energy in developing nations and based on a carbon credit system.

But the plan has been panned by activists wary of firms using these to "offset" their carbon emissions.

The White House announced Friday plans to require federal contractors to set targets to reduce their emissions in line with the Paris Agreement.

It also aims to step up efforts to cut methane emissions -- a major contributor to global warming -- with a "Super-Emitter Response Program" that would require companies to act on leaks reported by "credible" third parties.

Biden has also pledged to contribute $11.4 billion to a $100 billion per-year-scheme through which rich countries will help developing nations transition to renewable energies and build climate resilience.

But Democrats may be running out of time to honour that as control of the House of Representatives appears poised to shift to the Republicans from January in the wake of this week's mid-term elections.

"We're going to be pressing for passage of the appropriations bills," US lawmaker Kathy Castor, who chairs the climate crisis committee in the House, told AFP.

Developing countries will look to the United States for support on establishing a "loss and damage" fund through which rich polluters would compensate them for destruction from climate-induced disasters.

Washington has previously resisted that idea, but agreed to discuss it at COP27.

Biden will also use the trip to meet Egyptian President Abdel Fattah al-Sisi and discuss the human rights situation in the country, where the case of jailed dissident Alaa Abdel Fattah was raised by other leaders earlier this week.

Ahead of his trip, the White House expressed "deep concern" for the hunger-striking British-Egyptian activist.

After COP27, Biden will head to an ASEAN regional summit in Cambodia at the weekend before travelling to Indonesia for G20 talks.

He may have a chance to revive cooperation with China when he meets President Xi Jinping at the G20, after Beijing cut off climate talks with Washington due to US House Speaker Nancy Pelosi's visit to Taiwan in August.