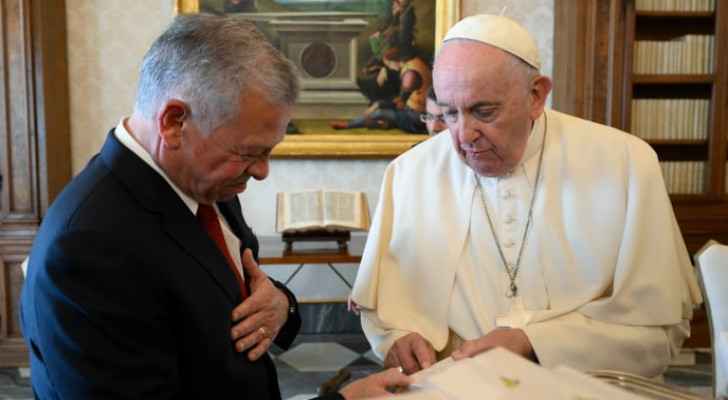 His Majesty King Abdullah met with Pope Francis during a visit to the Vatican City on Thursday.

The meeting, attended by Her Majesty Queen Rania Al Abdullah, focused on the need to promote interfaith dialogue, harmony, and coexistence, as well as safeguarding the Christian presence in the region.

Discussions at the meeting—attended by His Royal Highness Prince Ghazi bin Muhammad, His Majesty’s chief adviser for religious and cultural affairs and personal envoy—underscored the importance of maintaining efforts to achieve peace in order for peoples to live in security and stability.

His Majesty also held an expanded meeting with Secretary of State of the Holy See Cardinal Pietro Parolin, during which the connection between security and peace was highlighted, and the importance of breaking the stalemate in the Middle East peace process was affirmed as critical for bolstering regional security and stability, and promoting harmony in the region.

During the meeting, also attended by His Royal Highness Prince Ghazi, the King and Cardinal Parolin highlighted Jerusalem as key to achieving peace in the region, noting that any attempts to alter its historical and legal status quo will undermine the rights of worshippers in the holy city.

The Cardinal noted Jordan’s vital role in safeguarding holy sites in Jerusalem, under the Hashemite Custodianship, and in a manner that preserves the city's identity as a symbol of peace.

Cardinal Parolin commended Jordan’s efforts, under His Majesty’s leadership, to safeguard the Christian presence in the region as an integral part of the Middle East’s past, present, and future, and its demographic composition.

The King expressed Jordan’s keenness to preserve and restore Christian religious sites, especially the Baptism Site of Jesus Christ (Bethany beyond the Jordan), located on the East Bank of the Jordan River.

His Majesty said the Baptism Site receives the utmost care, noting that the upcoming phase will be marked by further development and improvement to the facilities and services provided to visitors and Christian pilgrims, within Jordan’s commitment to the freedom of worship.

The meeting also covered the latest international developments and the need for joint action to achieve peace.

Deputy Prime Minister and Foreign Minister Ayman Safadi, Director of the Office of His Majesty Jafar Hassan, Jordan’s non-resident Ambassador to the Vatican Makram Queisi attended the meeting on the Jordanian side, while Archbishop Paul Richard Gallagher, the Vatican’s secretary for relations with states and international organisations, and Monsignor Marco Formica attended the meeting from the Vatican.