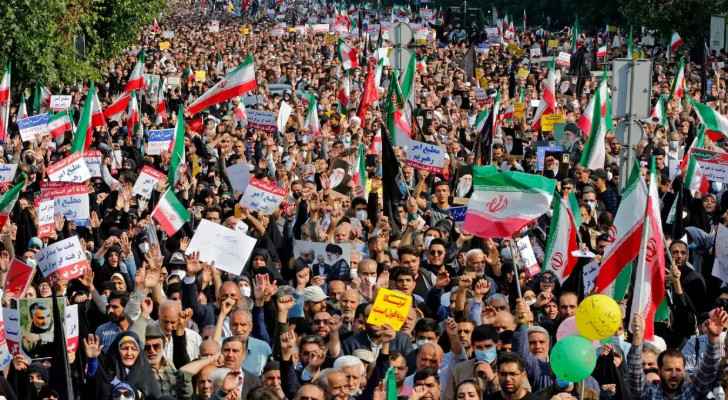 Iran has deployed mounted police in a bid to contain more than seven weeks of protests sparked by the death in custody of Mahsa Amini, according to videos posted online.

The clerical state has been rocked by a protest movement that erupted when Amini, 22, died after her arrest for allegedly breaking Iran's strict hijab dress rules for women.

Young women have led the way, removing and burning their head coverings, chanting anti-regime slogans and confronting security forces on the street despite a crackdown that has killed dozens.

In a rare move, the authorities have deployed a posse of police on horseback in Tehran's streets to stifle the demonstrations, according to a video posted on social media and verified by AFP.

The special unit on patrol is seen standing in front of a row of Iranian national flags on a major road in the northwestern neighborhood of Sadeghiyeh.

Created in 2013, the mounted division of Iran's police force -- known as Asvaran -- is made up of Turkoman and Arabian horses, among others.

The cavalry unit has been seen on the streets of the Iranian capital in the past, mainly during parades, but it is uncommon to see it deployed during protests.

Amini, an Iranian of Kurdish origin, died on September 16, three days after she was arrested in Tehran by the morality police, igniting nationwide protests.

The Iranian authorities have adopted a range of tactics in a bid to suppress the protests, which officials refer to as "riots."

The government has also imposed internet restrictions, including blocking access to Instagram and WhatsApp, and have waged a campaign of mass arrests.

Norway-based group Iran Human Rights says the security forces have killed at least 186 people in the crackdown on the Amini protests.

At least another 118 people have lost their lives in distinct protests since September 30 in Sistan-Baluchistan, a mainly Sunni Muslim province on Iran's southeastern border with Pakistan.