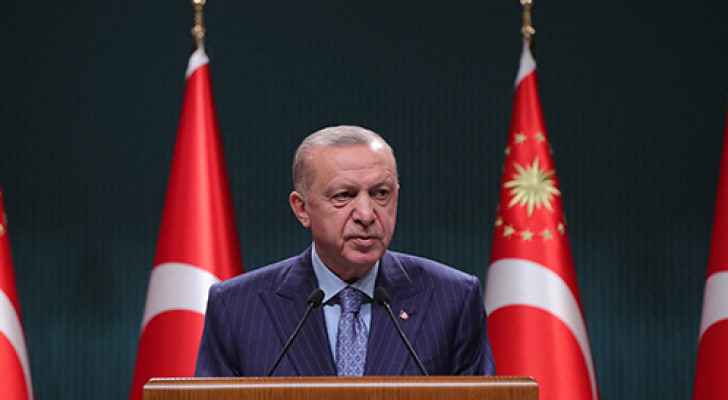 Swedish Prime Minister Ulf Kristersson was due to meet President Recep Tayyip Erdogan in Ankara on Tuesday, in a bid to persuade Turkey to drop its opposition to Sweden joining NATO.

After Russia started its military operation, Sweden and Finland abandoned their long-held policy of non-alignment and applied to join the military alliance.

But Turkey has stalled ratification of their bids, accusing them of harboring outlawed Kurdish militants.

Erdogan -- who is seeking re-election next year -- is in a position of strength, having persuaded Russian counterpart Vladimir Putin to stop blockading Ukraine's grain exports.

He and Kristersson were due to meet at the presidential palace at 14:15 GMT and then give a press conference.

"Their accession will make our alliance stronger and our people safer," he said, adding that bringing Sweden and Finland into NATO would "send a clear message to Russia."

Stoltenberg stressed the two had agreed in June to concessions to Turkey, including addressing its request for "terror suspects" to be deported or extradited.

Turkey accuses Sweden in particularly of leniency towards the militant Kurdistan Workers' Party (PKK) and its Syrian offshoot, the People's Protection Units (YPG).

Ankara says it provided Sweden and Finland in June with a list of people it wanted extradited.

Since then, Stockholm has authorized one extradition for fraud. Both Sweden and Helsinki say that extradition decisions are made by the courts.

The PKK is blacklisted by Ankara and most of its Western allies. But the YPG has been a key player in the US-led military alliance combating the Islamic State group in Syria.

While Sweden has in the past voiced support for the YPG and its political wing, Kristersson's government appears to be distancing itself.

"There is too close a link between these organisations and the PKK, which is a terrorist organisation listed by the EU," Foreign Minister Tobias Billstrom said on Saturday.

Some analysts nevertheless believe Turkey's presidential and parliamentary elections in June 2023 could delay the Nordic bids.

"The Turkish side will ratify their membership when it feels it is the best moment to cash that card," said Ilke Toygur, professor of European geopolitics at the University Carlos III in Madrid.

"I sense that many countries in NATO already assume that enlargement will be next year, maybe even in the second half of next year," she told AFP.

"It is widely assumed that Turkey is also trying to negotiate for other things. It could be the F16s. It could be about its overall relationship with Russia."

Leading US senators have threatened to block the sale to Ankara of US F16 fighter jets unless Turkey ends a maritime border dispute with Greece.

Turkey, which seeks to maintain good relations with both Ukraine and Russia, has not joined Western sanctions on Moscow and has acquired a Russian missile defense system while also supplying Kyiv with combat drones.

"It remains to be seen if Erdogan thinks he's got enough signs of goodwill from Sweden and it's therefore in his political and military interest to declare victory, or if he thinks sticking to the current line will serve his re-election campaign," said a European diplomatic source.

There was still a "reasonable chance" Turkey would ratify the NATO bids before the 2023 elections, the source said.

Erdogan warns Sweden on NATO after ....

Coming months 'will be difficult' for ....