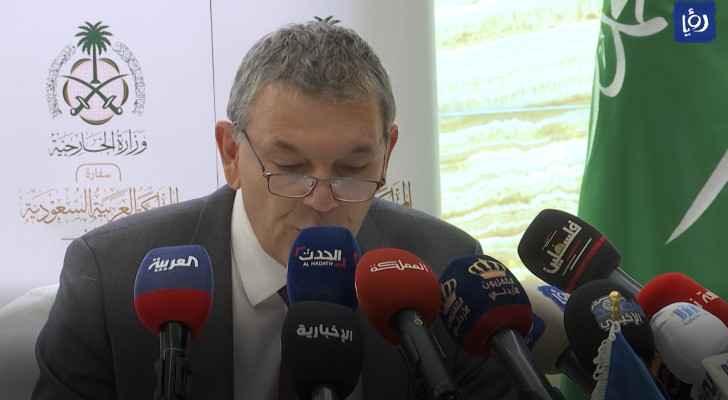 The United Nations Relief and Works Agency for Palestine refugees in the Near East (UNRWA) welcomed Sunday a contribution of USD 27 million from the Kingdom of Saudi Arabia in support of the Agency’s programs and operations in the region.

“We are delighted to receive this generous contribution from the Kingdom of Saudi Arabia,” said Philippe Lazzarini, UNRWA Commissioner-General during a ceremony held at the Saudi Embassy in Amman in the presence of Mr. Ahmad Abu Holi, the Head of the Palestine Refugees Department. “This renewed commitment to the work of UNRWA is in line with the Kingdom’s long-standing generosity towards Palestine refugees and in solidarity with them” he added.

This unrestricted contribution from the Kingdom of Saudi Arabia will enable UNRWA to continue the delivery of programs in education and health and reach the most vulnerable Palestine refugees in the West Bank, including East Jerusalem, Gaza, Jordan, Lebanon, and Syria.

Nayef bin Bandar Al-Sudairi, Ambassador of the Kingdom of Saudi Arabia to Jordan, said: "The Kingdom of Saudi Arabia has historically been devoted to providing political and socio-economic support to the Palestinian cause. This includes supporting the rights of the Palestinian people in the United Nations and humanitarian organizations and the historic cooperation with UNRWA through continuous support for the services it provides. We sincerely appreciate the role and work of UNRWA in supporting Palestine refugees. This has become especially critical in light of the unprecedented financial challenges due to the Covid-19 pandemic, and the challenges of the repeated Israeli aggression against the Gaza Strip and the Palestinian people across the Palestinian territories".

Al-Sudairi added: "The Kingdom affirms its commitment to peace as a strategic choice. Security and stability of the Middle East require speeding up efforts to reach a just and comprehensive solution to the Palestinian question, in line with international resolutions, the Arab Peace Initiative, and the establishment of an independent Palestinian state on the 1967 borders with East Jerusalem as its capital. The Kingdom condemns all unilateral measures that undermine the two-state solution and calls for their immediate cessation".

Al-Sudairi pointed out that the total Saudi support to Palestine since 1999 has amounted to more than USD 5.2 billion, including support to the Palestinian Authority's budget and direct support to different sectors including infrastructure, health, education, food and agriculture security, Palestinian government and civil society, water, and environmental reform.

The Kingdom of Saudi Arabia has been one of the largest donors to UNRWA. Saudi Arabia has contributed nearly USD 1 billion to UNRWA only in the past decade. This recent contribution comes following a pledge of USD 50 million the Kingdom made in 2019.

“There are few sources of stability in the lives of Palestine refugees. Access to basic services like education and primary health care are among them. Following decades of partnership with the Kingdom of Saudi Arabia, UNRWA looks forward to further deepening it to promote a dignified life, especially in the face of growing needs and deteriorating conditions in the Palestinian camps across the region” concluded Lazzarini.

'If UNRWA stops providing its services, we will face a ....

'If UNRWA stops providing its services, ....