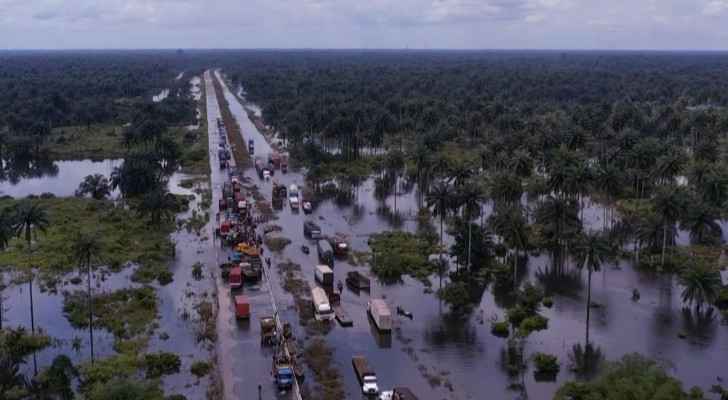 It was pitch black when the waters came, forcing mother Fortune Lawrence and her eight children to jump on a makeshift boat and flee their house.

For the past two weeks, they have been living in dire conditions near Ahoada, in Rivers state, in a school now crowded with more than a thousand people displaced by Nigeria's worst floods in a decade.

"I was afraid to die in the water," said Lawrence, surrounded by other families. "Here, we have nothing. Not enough food, no diapers, no mosquito nets."

Flooding is frequent during Nigeria's rainy season but this year, more than 600 people have died and 1.3 million others were forced to leave their homes, according to the latest government figures.

In southern Rivers state, one of the worst affected, informal camps have popped up for those who managed to escape.

Some people are still stuck in flooded towns and villages, according to resident Obed Onyekachi.

There was "no way they could cross and come here," said the 32-year-old, with anger in his voice. "How many of our brothers have been swallowed by the water, have gone missing?"

"Crops have been destroyed. We have no hope anymore. We will have to face starvation."

Traveling across the state is a challenging task and makes it difficult to deliver aid.

On the main road, a tank truck has tipped over in the floods, and residents said several people had died in the area, where there are strong currents.

Others have managed to cross, wading through waist-deep water.

Alamin Mohamed, 25, was trying to travel on his motorbike, but said he had been stuck on the road for seven days.

"We don't know how much time it will last," he said.

The roof of a church could be seen poking out from the murky waters, between high voltage power lines. Wooden rafts have been ferrying large groups of people around.

The UN's Food and Agriculture Organization representative in Nigeria, Fred Kafeero, warned this week that the floods had increased the risk of disease outbreaks such as cholera.

At a primary school in Ihuike, a community in Ahoada, displaced people are lying on the floor, squeezed against one another. There are around 50 people in each classroom.

A group of local volunteers are cleaning and dividing the meager food supplies received from local authorities.

"We need a clean environment. We are really careful but we are exhausted. Even the water from the well is contaminated," said one volunteer, who asked to remain anonymous.

Still, the needs are immense. In one of the informal camps, women told AFP they did not have anything for menstrual hygiene. "We have no tissue for that," one woman said.

At the entrance to the camp, children stood in line, waiting to be seen by women wearing surgical gloves.

They were getting an oral HIV test, explained nurse Bukky Chika Emeyi. In case of a positive result, they will need a blood test in hospital.

"Their living conditions are bad. The risk of transmission is high," said the 27-year-old, who works with the local charity IHVN.

"Women are giving birth, helped by other women who are not trained, not educated, and using unsterilised tools."