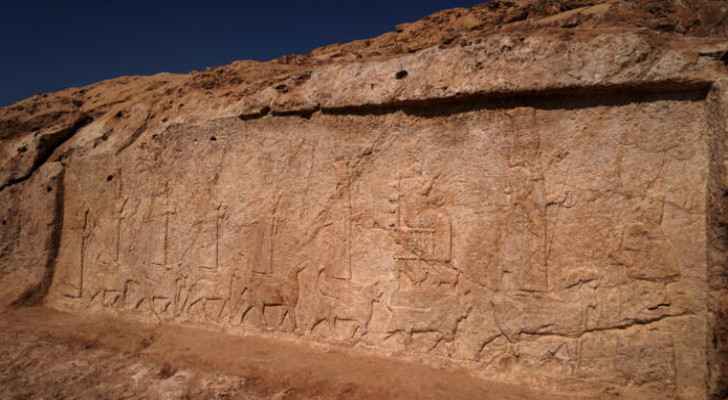 Authorities in northern Iraq on Sunday unveiled an "archaeological park" of 2,700-year-old carvings from the rule of the Assyrians, including showing kings praying to the gods.

The 13 stunning monumental rock-carved bas-reliefs were cut into the walls of an irrigation canal that stretches for some 10 kilometers (six miles) at Faida in northern Iraq.

The panels, measuring five meters (16 feet) wide and two meters tall, date from the reigns of Sargon II (721-705 BC) and his son Sennacherib.

"Perhaps in the future others will be discovered," said Bekas Brefkany, from the department of antiquities in Dohuk, in Iraq's northern autonomous Kurdistan region.

Faida is the first of five parks the regional authorities hope to create, part of a project aimed to be "a tourist attraction and a source of income," Brefkany added.

The carvings were unearthed during several digs over recent years, by archaeologists from Kurdistan and Italy's University of Udine.

Last year, Daniele Morandi Bonacossi, professor of Near Eastern archaeology at the university, said that while there were other rock reliefs in Iraq, none were so "huge and monumental" as these.

Iraq was the birthplace of some of the world's earliest cities.

As well as Assyrians it was once home to Sumerians and Babylonians, and to among humankind's first examples of writing.

But in recent years it has suffered as a location for smugglers of ancient artifacts.

Looters decimated the country's ancient past, including after the 2003 US-led invasion.

Then, from 2014 and 2017, the Islamic State group demolished dozens of pre-Islamic treasures with bulldozers, pickaxes and explosives. They also used smuggling to finance their operations.

Last year, the United States returned about 17,000 artifacts to Iraq, pieces that mostly dated from the Sumerian period around 4,000 years ago.