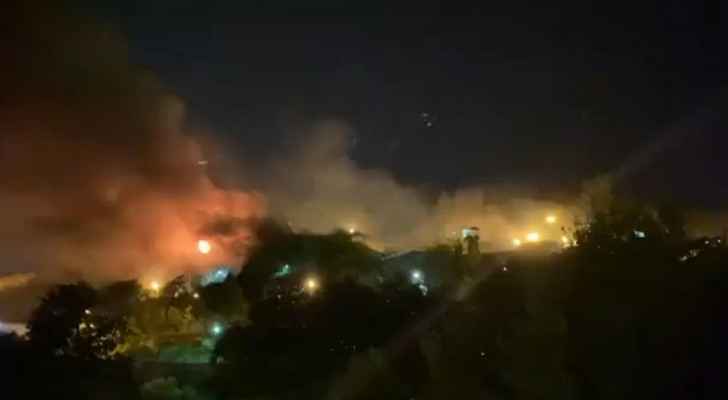 Rights groups voiced grave fears Sunday for the inmates of Iran's notorious Evin prison after it was hit by a major fire overnight, in the fifth week of the wave of protests sparked by the death of Mahsa Amini.

Gunshots and explosions were heard during Saturday night's blaze from inside the vast complex in northern Tehran, which was seen illuminated by flames and smothered by smoke in video footage posted on social media channels.

The fire -- blamed on "riots and clashes" and later brought under control according to authorities -- came as Iran has been rocked by protests over the death of 22-year-old Amini after her arrest for violating Iran's strict dress code for women.

The demonstrations have turned into a major anti-government movement in the Islamic republic, confronting its clerical leadership with one of its biggest challenges since the ousting of the shah in 1979.

Evin, infamous for the ill-treatment of political prisoners, also holds foreign detainees and thousands facing criminal charges. Hundreds of those arrested during the recent demonstrations have reportedly been sent there.

"Evin Prison in Tehran is on fire and shots can clearly be heard. The life of every political and ordinary crime prisoner is at grave risk", the Oslo-based non-government group Iran Human Rights (IHR) warned overnight.

It said authorities had closed off roads leading to the prison in an apparent bid to stop protests taking place outside the jail. Some headed there on foot and chants of "Death to the dictator" could be heard in videos shared by social media channel 1500tasvir.

"Prisoners, including political prisoners, are completely defenseless inside that prison," said Hadi Ghaemi of the New York-based Center for Human Rights in Iran (CHRI), expressing fears inmates could die.

Freedom of expression group Article 19 said it had heard reports of telephone and Internet connections at Evin being cut and that it was "extremely worried for the safety of Evin's prisoners".

Iranian rights activist Atena Daemi, herself a long-time inmate of Evin, wrote on Twitter that in the early hours of Sunday several buses and ambulances were seen leaving the prison, but it was not clear where they were going.