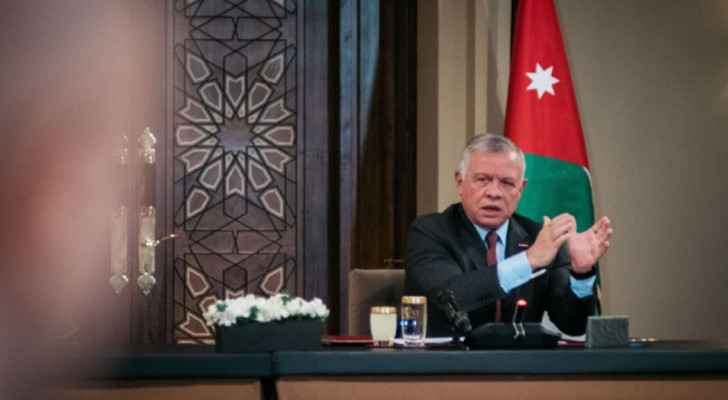 His Majesty King Abdullah on Sunday met with a number of political figures at Al Husseiniya Palace to keep them apprised of the outcomes of the talks held with several world leaders during the visit to New York to participate in the 77th United Nations General Assembly, as well as during meetings held in Japan and France.

His Majesty stressed Jordan’s steadfast position on the need to establish an independent Palestinian state on the 4 June 1967 lines, with East Jerusalem as its capital, voicing hope in the resumption of peace negotiations between the Palestinians and the Israeli Occupation in the upcoming phase, leading to a just and comprehensive solution to the Palestinian cause.

The King, referring to his speech at the UN, reiterated Jordan’s commitment to safeguarding Islamic and Christian holy sites in Jerusalem, under the Hashemite Custodianship.

His Majesty noted that Jordan’s cooperation with Egypt and Iraq and its participation in regional projects are aimed at building economic partnerships that advance the region and contribute to enhancing economic conditions.

The King underscored that Jordan advocates for the inclusion of Palestinians in regional cooperation projects, especially given that a strong economy is an integral component to achieving a Palestinian state, bolsters the steadfastness of the Palestinians, and mitigates their economic challenges.

Turning to the Syrian crisis, His Majesty reaffirmed that Jordan continues to exert efforts towards reaching a political solution that safeguards the territorial integrity of Syria and the unity of its people, while guaranteeing the safe and voluntary return of refugees.

The King also discussed the efforts of the Jordan Armed Forces-Arab Army to protect society from drug smuggling, noting that the Kingdom’s borders are secure with the efforts of JAF and security agencies’ personnel.

For his part, Deputy Prime Minister and Foreign Minister Ayman Safadi gave an overview of Jordan’s diplomatic efforts, including building bilateral relations with a number of countries and enhancing the Kingdom’s key regional role.